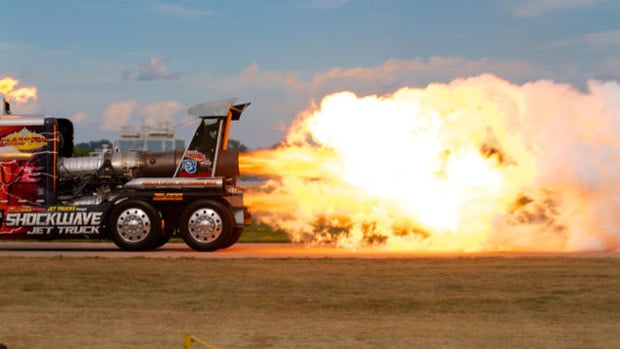 One of the coolest things I ever saw as a kid happened at an air show my parents took me to. It was cool enough to see the Blue Angels flying overhead, but at intermission, the show had a big semi truck that was powered by jet engines.

I recall the truck racing against an airplane of some sort and winning the race. When you are being pushed by jets, I guess traction isn’t an issue. There is a jet-powered truck making the rounds at events in the U.S. called Shockwave and it is as awesome as you think it is.

Apparently, the owner of Shockwave had to fire up the truck’s 36,000 horsepower jet engines after some maintenance and the result was lots of screaming jet sounds and small explosions at his farm in Green County Missouri. The neighbors around the farm where the truck was being tested thought a jet crashed and called 911. The result was a number of emergency responders showing up because they feared lots of injured people.

Check out the awesome video of Shockwave below and you will understand the massive sound and flames the beast produces.