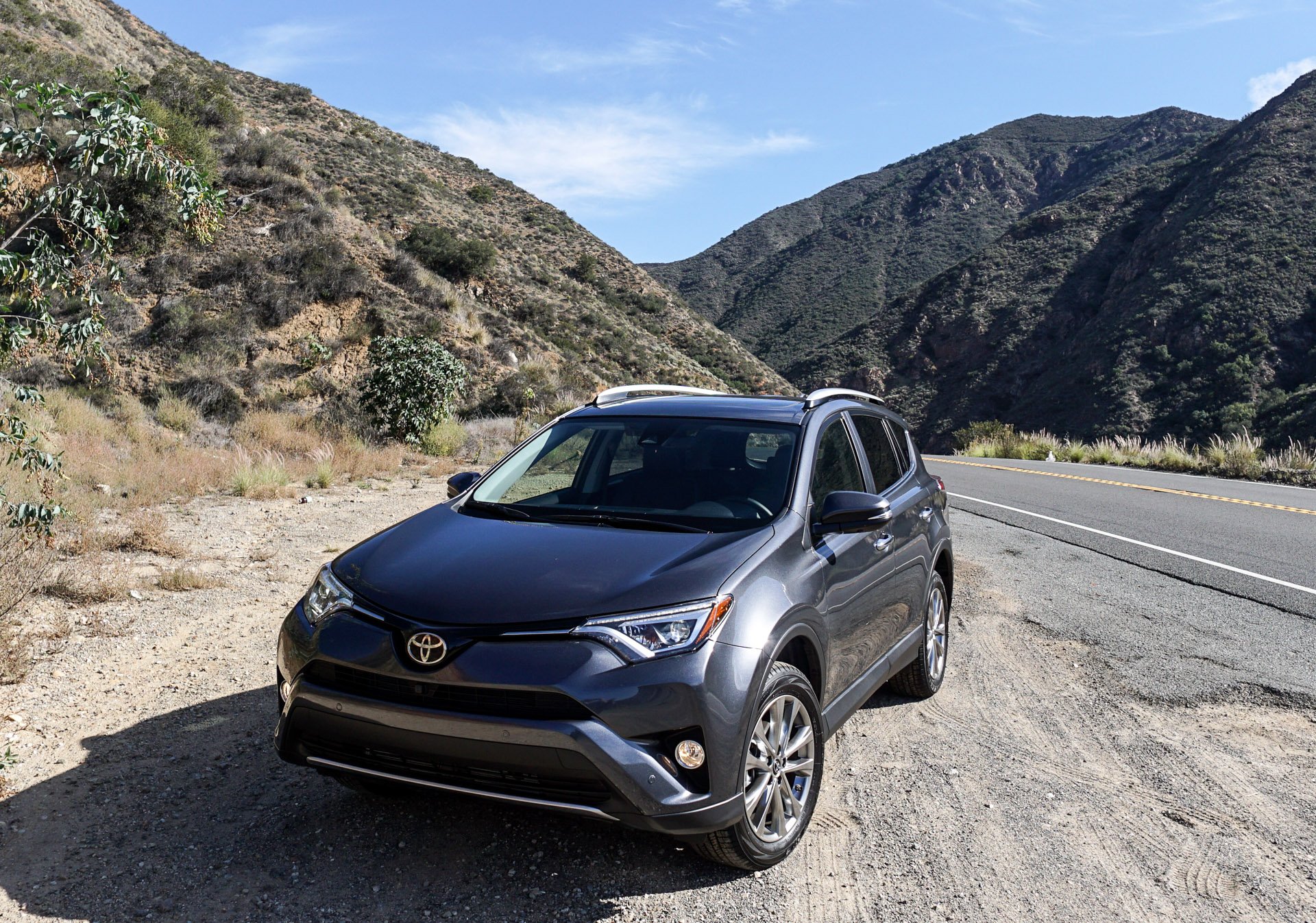 Recently, I had the chance to see how a RAV4 was capable enough to run with the big boys in rally racing. Now, I’ve spent some time behind the wheel of two new models of the RAV4 that Toyota is bringing to market for 2016. There’s a brand new hybrid model designed for fuel economy and improved performance, and a sporty new trim level, dubbed the RAV4 SE. 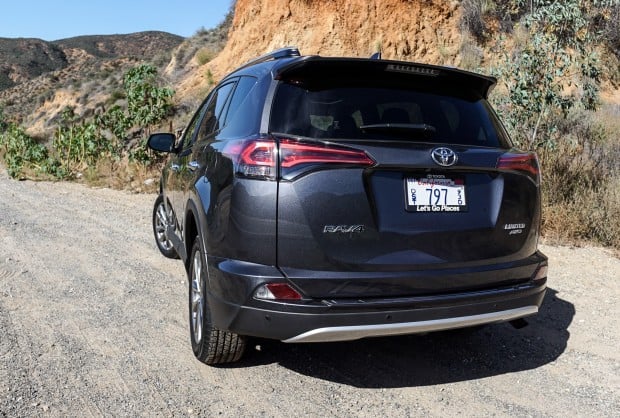 All RAV4s get an updated front end for 2016 that’s a bit cleaner and more modern than the outgoing model. When viewed from the side, the front overhang appears higher and more angular, giving it more of truck like appearance than before. There’s also been subtle tweaks to the design of the rear bumper, the addition of a standard rear skid plate, and updated alloy wheels. Toyota also worked to reduce noise, vibration and harshness inside the cabin, and this is definitely the quietest RAV4 yet. Other changes include refinements to the AWD system on the gas models, including the transfer of additional power to the rear wheels while steering, to provide even better cornering. The shocks and coils have also been improved for better comfort on bumpy roads, and less body roll on smooth roads. Additional spot welds were added the frame to improve rigidity as well. 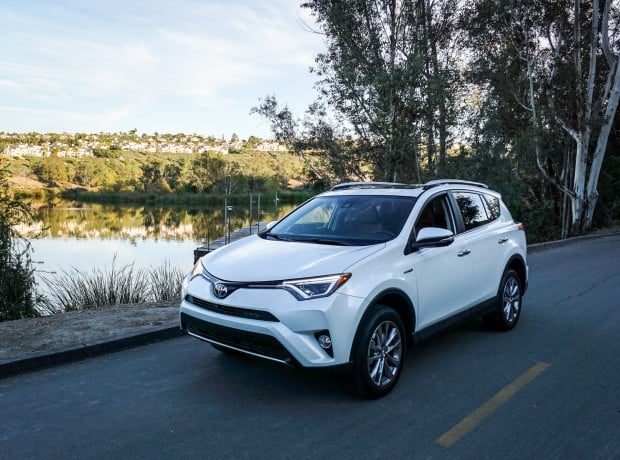 The RAV4 Hybrid offers up the most powerful drivetrain of the line, with a 2.5-liter Atkinson cycle engine with a CVT up front and a motor driving the rear wheels, meaning every hybrid offers intelligent all-wheel drive. This system – borrowed in large part from the Lexus NX300h – provides 194 hp and 206 lb-ft. of torque, compared to the 176 hp and 172 lb-ft. in the gasoline models. This translates to a bit more off-the-line and top-end punch, though the differences are fairly subtle. That said, the hybrid with do 0 to 60 in 8.1 seconds versus 9.0 seconds in the conventional drivetrain. Not bad, given the fact that the hybrid weighs 320 pounds more than the gas models. 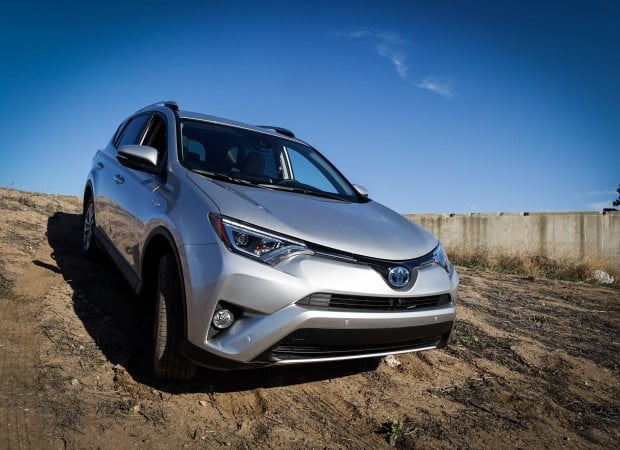 Where the main difference with the hybrid come into play is in fuel economy. The hybrid scores an impressive 34 city/31 hwy/33 combined MPG, while the gas model does 22/29/25 respectively. So if you plan on doing a lot of city driving, the hybrid could save you quite a bit a the pump.

The RAV4 variant that got me most excited is the new SE model, though. While its upgrades are mostly cosmetic, it finally gives this little crossover the sporty image that reflects its true capabilities. 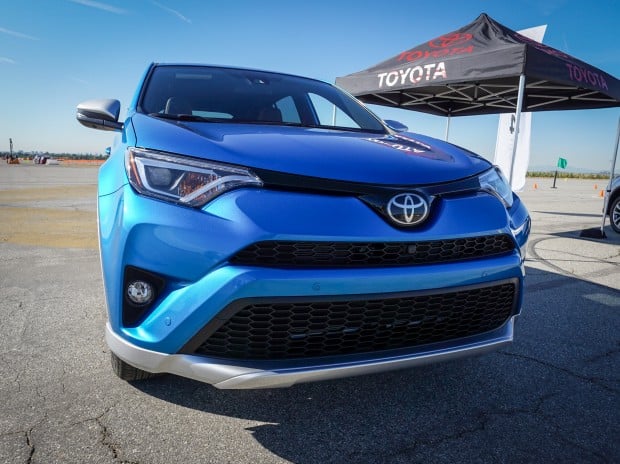 Among the features you’ll find in the SE are a unique black honeycomb grille, black accented LED headlights, cool two-tone 18″ alloys, and a silver metallic accent trim as an option if you go for the white, black or blue pearlescent paint. I think it looks particularly great in blue. 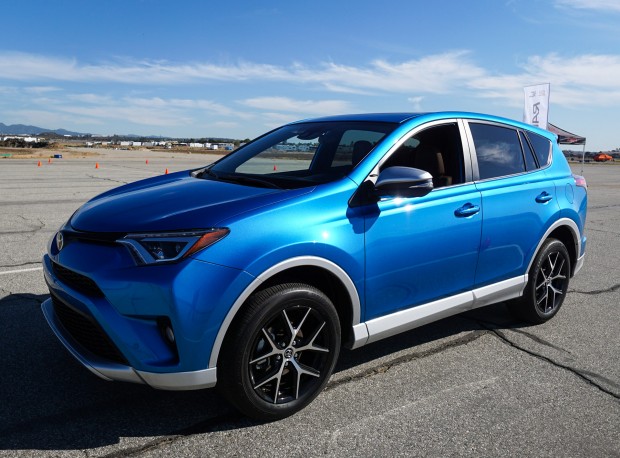 Inside, the SE gets a black headliner and pillars, softex seats with accent color stitching, gunmetal trim, and paddle shifters. 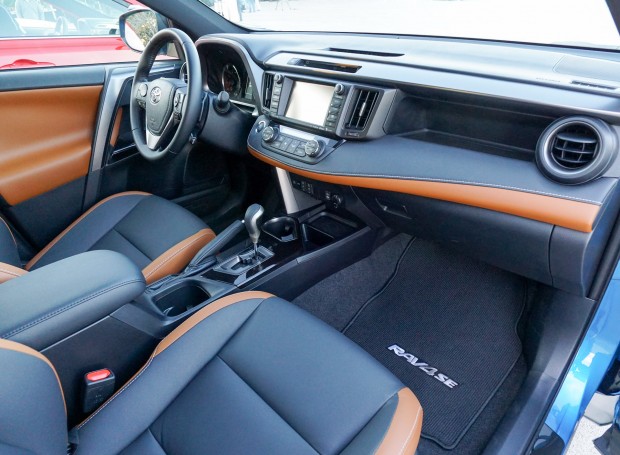 The SE also has a sport-tuned suspension, which paid off when I hit the autocross course. I thrashed the SE all over the track that Toyota set up for us at the old El Toro military base, and no matter how hard I pushed it, this little car was up to the challenge. With the exception of a slightly aggressive traction control system that slowed me down as I tried to powerslide into a hard 90º corner, it offered up a fun and reassuring ride through every turn. 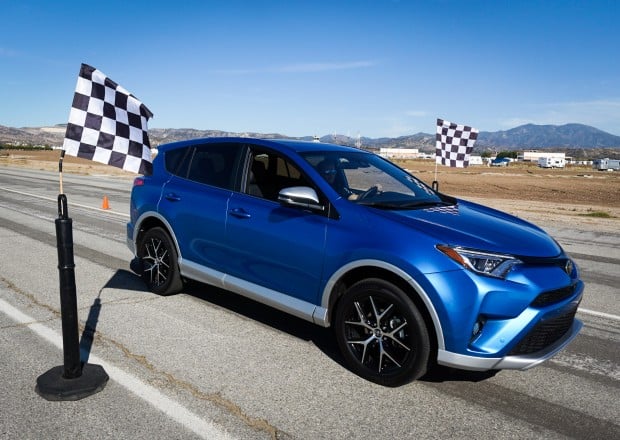 Perhaps the biggest question that crossed my mind was why Toyota isn’t offering the more powerful hybrid drivetrain in the sporty SE trim. Currently, it’s only available in XLE and Limited trims, but I’m hoping that demand will drive production of an SE Hybrid at some point soon. 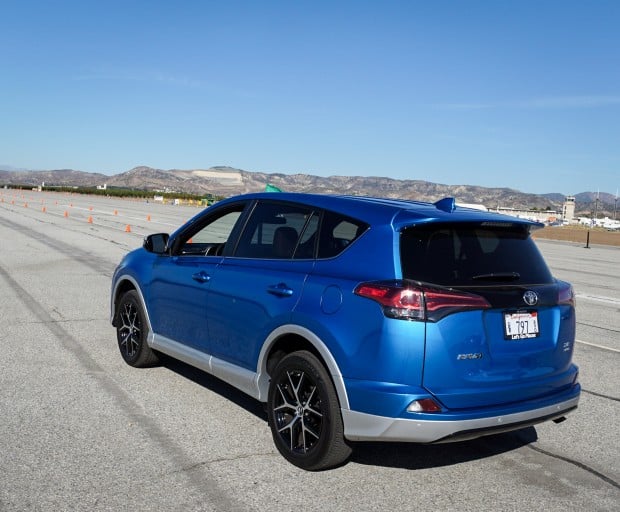 My trip RAV4 road trip earlier this year already made me a believer in Toyota’s little crossover, and the 2016 models only serve to reinforce my feelings. Despite a rather tame perceived image, the RAV4 is a highly capable and surprisingly fun car to drive. Perhaps the new SE trim will help to drive that point home with prospective buyers. And given the fact that the hybrid variants of the RAV4 are only $700 more than their gasoline counterparts, I can see no reason to go with anything but the hybrid models unless you must have the base LE or sporty SE trim.