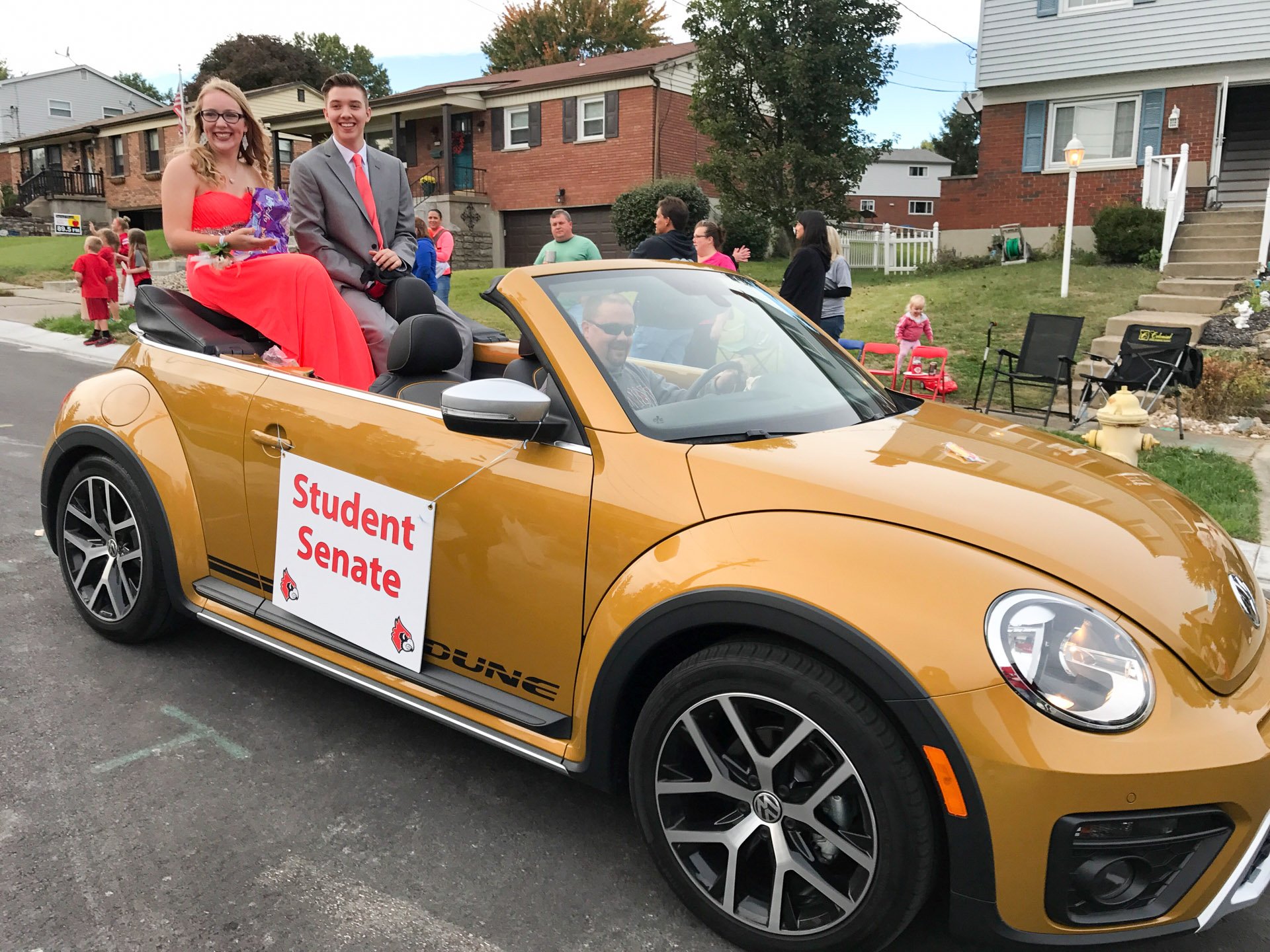 Who doesn’t love a parade? Whether it’s for a holiday or a homecoming, they’re something special. And they require a special car too. I was asked to try to find a convertible to drive students from my daughter’s high school in their Homecoming Parade. Admittedly finding a convertible here in the Midwest in the fall can be a challenge. Fortunately, I was able to get something befitting of such an occasion with the 2017 Volkswagen Beetle Dune.

This was no regular Beetle convertible. Sure, this iconic car – in convertible form – is up to the parade challenge. But in the special edition Dune version, it’s extra appealing – befitting members of the Homecoming court. In fact, many of the spectators who saw the car along the parade route told me how they liked the car. They may have been sucking up to get extra candy thrown their way, but I still took it as a compliment to how appealing this convertible is. 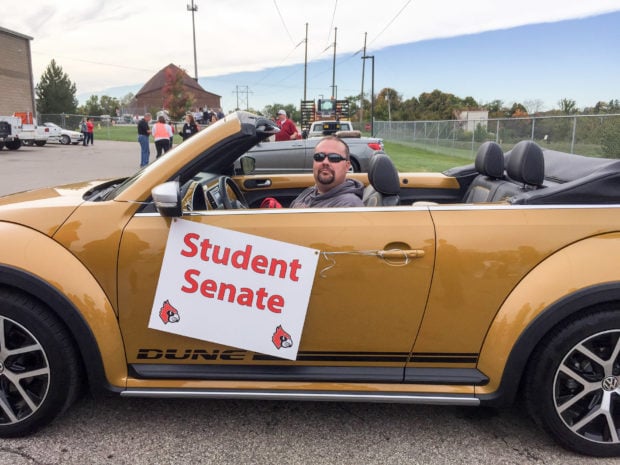 The Beetle is a very popular vehicle that you see on the road everywhere, from the classic ’60s/’70s Beetles to the more modernized, and dare I say slightly more masculine, newer version ones of today. So for this one to be a standout, it requires some special touches. And the Beetle Dune has plenty of distinction with new bumpers, a special wheel design and raised ground clearance. It’s definitely not your run-of-the-mill “punch buggy.” Additionally my tester was finished in an eye-catching color called Sandstorm Yellow Metallic (one of only three color options available for this special edition). With hundreds of cars driving in the parade, this one was a standout. And that’s the point of this special edition Volkswagen. 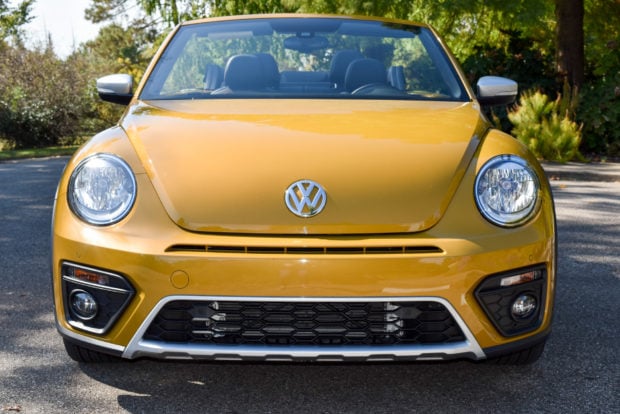 The Beetle Dune is offered as a convertible and a coupe. My drop-top was great for the parade, and honestly the Beetle is best suited as a convertible if you ask me. The new front and rear fascia along with special LED headlights help add to the attractive exterior of this Beetle. Ground clearance is 0.4 inches higher than a standard Beetle and the Dune’s body is 0.6 inches wider. These may seem like miniscule improvements, but overall they give the Beetle Dune a more muscular and rugged posture. Don’t be fooled by the name though, it’s no dune buggy, as it’s not going off roading at any time, but it certainly feels like a fresh look for the iconic Beetle.

The Beetle Dune has a capable powertrain for its size. It has a 1.8-liter turbocharged inline 4-cylinder engine that makes 170 horsepower and 184 lb-ft. of torque. Off the 5 mph parade route, the Beetle was fun to drive. The turbo engaged immediately with no lag. The six-speed automatic transmission was adequate but wasn’t overly impressive. The slightly taller stance helped the Beetle drive differently than other ones I’ve driven. It still felt squatty to the road and offered go-kart-like performance, but the higher stance offered more confidence around turns and took the feel of the road away just a little. True Beetle enthusiasts may not appreciate that as much, but otherwise, it’s a relatively minor driving difference, and one that I appreciated. 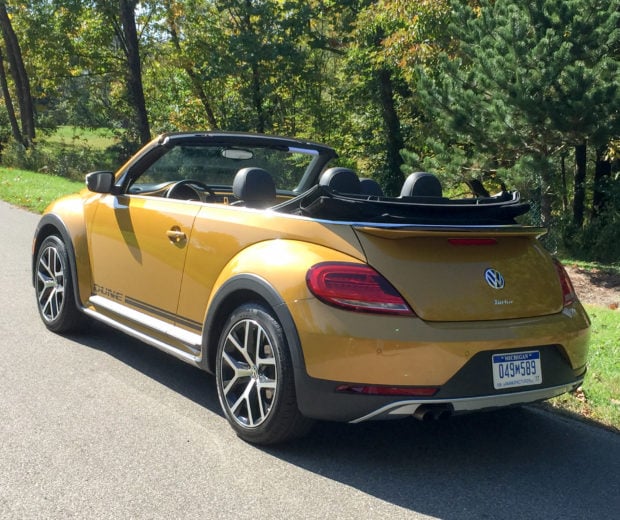 Inside, the Beetle Dune has more unique touches including sport seats with contrasting stitching and a leather-wrapped steering wheel. The Dune’s Sandstorm Gold exterior color carries to the inside with a bold and dominating dashboard. The color runs the length of the entire dash as well as the side panels. Even the hand-stitched seats have the gold ticking on them. The look is certainly bold, but everything inside that is the special color is made of a hard plastic material. While it looks neat, and gives a bold and congruent look to this car, it doesn’t offer much in terms of premium or softer touchpoints. 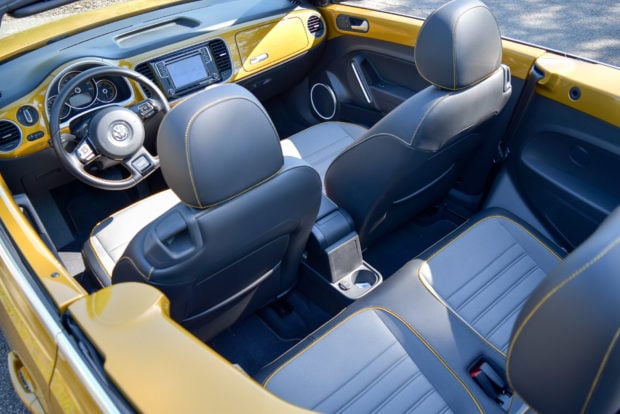 The front seats are comfortable with just enough leg and shoulder room. The back seat has limited legroom, so the four-passenger Beetle is better as a two-passenger cruiser. My two Homecoming reps sat on the back of the back seats so they could sprawl out more, otherwise they would’ve been cramped and uncomfortable in that back seat. With the top up, headroom is an issue. For those over six feet tall, their head will skim the top of the roof surely. I only enjoyed the Beetle with the top down and couldn’t imagine this as a coupe, where the thrill of the open road and the wind in your face would not be an option. And that’s where the joy of this car truly comes from.

The Dune has just enough technology, including a 6.3-inch touchscreen. It functions similarly to many smartphones with gestures like swiping and pinch-zooming. It’s easy to figure out, and unlike other Volkswagens I’ve tested, it’s not too complicated. The infotainment system integrates well with smartphones through Android Auto and Apple CarPlay. There are two USB ports as well. The additional technology package includes a Fender Premium Audio System, keyless access and a push-button start. A rearview camera and VW’s Park Distance Control system help make parking even easier, and a Post-Collision Braking automatically applies the brakes when a collision is detected. 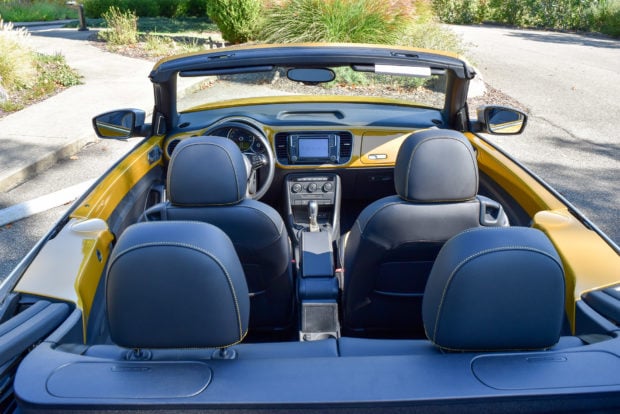 The coupe version has a starting price of $23,995 (USD). However, my tester had a price of $29,395. The convertible is truly the way to go with this vehicle, and worth the extra money. The Beetle Dune has an EPA rating of 24 mpg/city and 31 mpg/highway. In a week’s worth of driving I averaged 23 mpg. However, that did include the low speed, stop/start of the parade route, which certainly isn’t good for fuel economy. 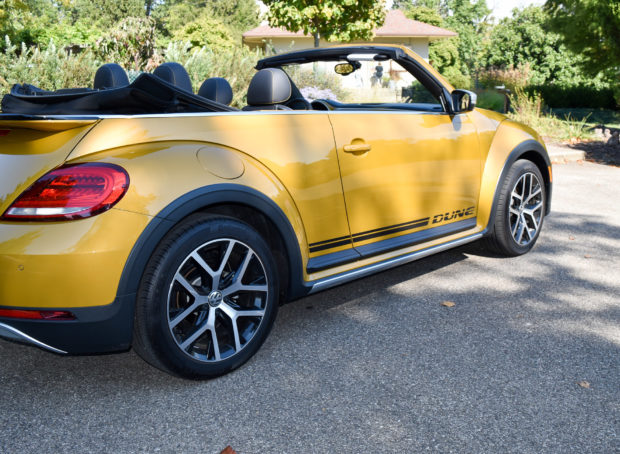 The Volkswagen Beetle continues to evolve and redefine itself. The iconic car is best suited as a convertible and with the special edition Dune, it pays homage to the Baja Beetles of the past. While respecting the car’s dynamic past, it also brings with it the many improvements that have made this third-generation Beetle so outstanding.