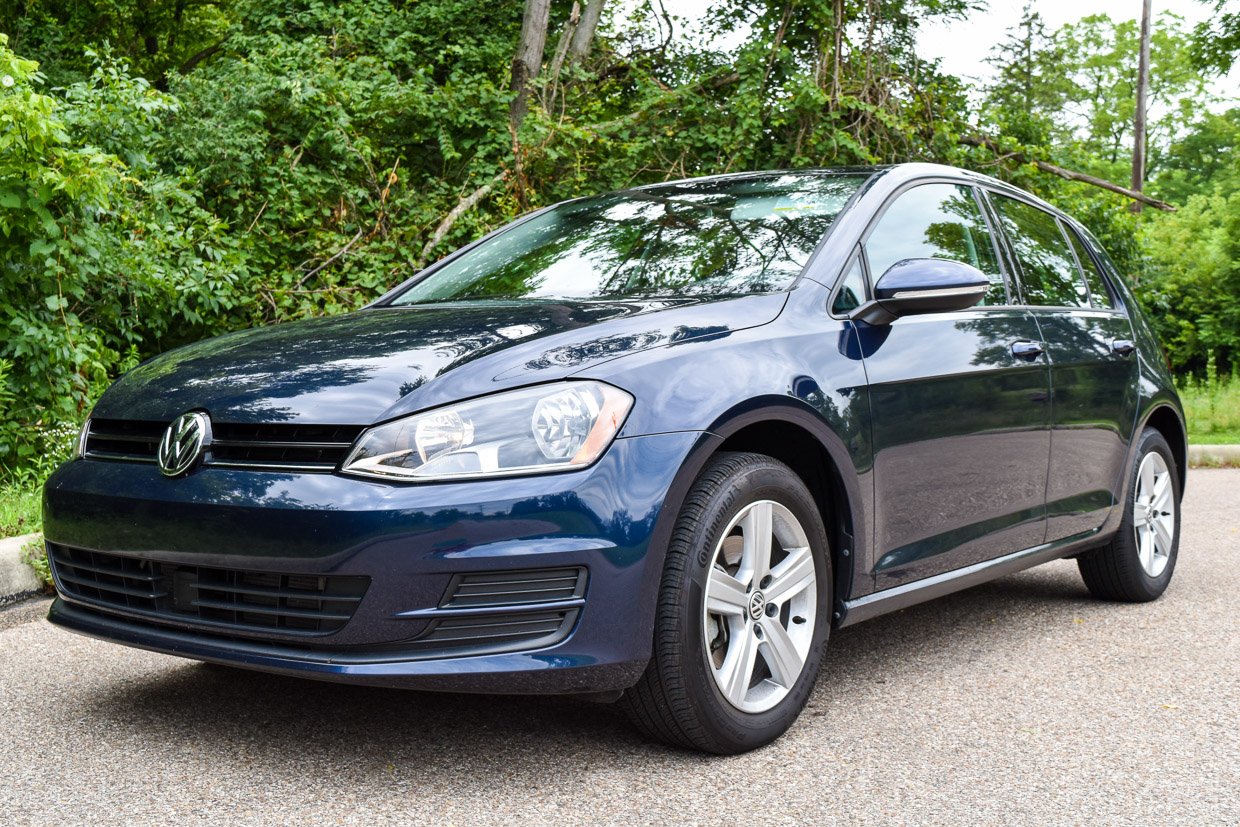 It’s hard to believe, but the Golf is now more than 40 years old. This is the third year on the new platform for the Golf, and Volkswagen continues to tweak and reinvent their iconic hatchback.

This week’s tester may seem familiar. That’s because it’s a car I’ve driven in several different trims this year, with each one being different and uniquely special in its own way. The 2017 Volkswagen Golf is a chameleon of a car. It’s available as a sporty compact car in GTI and R trim, as an off-road ready rival to the Subaru Impreza in the Alltrack, and in the go-to TSI hatchback trim. The chameleon-like vibe of the Golf is one of its biggest assets. And as the hatchback TSI, especially decked out in the Wolfsburg trim, the Golf shows why it’s one of the best cars offered by Volkswagen. The two-door version of the Golf has been discontinued for this model year in the US, and the Wolfsburg Edition replaces two different trims (SE and SEL). 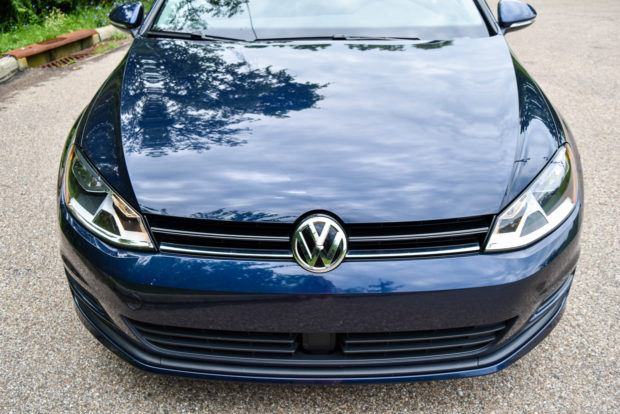 On looks, the 2017 Golf Wolfsburg Edition version plays it safe. There’s nothing overly garish about its styling. The steep slope of the hood gives the front-end distinction that leads to a pointed, narrow grille. Squinty headlights are adjoined by a design line that really ties the front end together.

The back end of the hatchback adds a small spoiler to help with aerodynamics and offer some sporty appeal. The C-pillar slopes down, toward the back of the car, and there’s a third window knockout that helps give back seat passengers a wider, better view. It also helps cut down on blind spots in the car as well as add a design element to the Golf. This year’s Golf is more than two inches longer than last year’s and a half inch wider. The added dimension gives the Golf more of a traditional station wagon/hatchback look than before. 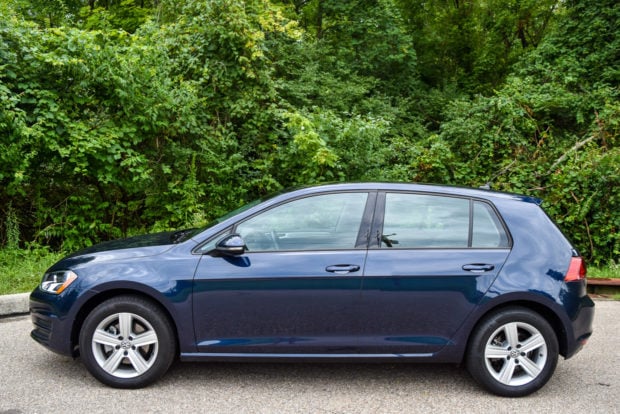 The change in length and width, hasn’t really impacted the Golf’s overall performance thanks to a turbocharged engine. There’s a 1.8-liter 4-cylinder TSI gasoline engine that produces 170 horsepower and 199 lb-ft. of torque. There’s very little turbo lag with this engine and it’s quick off the line. It’s not a speed demon by any stretch, but it performs quite well between 2,500 and 4,000 rpm. This sweet spot is handled well by the six-speed automatic transmission too. Though more gears would mean quicker shifts, the transmission is adequate. A five-speed manual transmission is standard and may be the more optimal choice for the true Golf enthusiasts out there. Like most other Volkswagens, the Golf handles well with responsive steering. The agile Golf is more exciting to drive than other hatchbacks, but on par with some of the main competitors like the Honda Civic and Mazda 3.

Despite being a longer car than before, there was no impact on fuel economy. The Golf remains in the segment average with an EPA rating of 25 mpg/city and 35 mpg/highway. The manual transmission gets slightly better highway mileage. In a week with my tester, I averaged 29.8 mpg and tried to get over the 30 mpg plateau, and might have if I spent less time on the throttle. Then again, it wouldn’t have been as enjoyable. 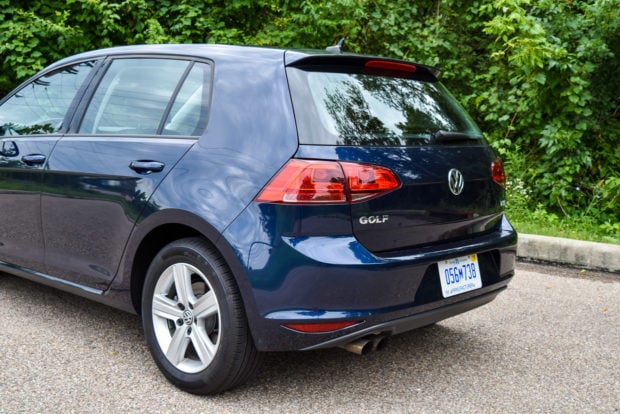 Inside, extra space is noticeable. Before, the Golf felt compact and small, now it rivals the Honda Fit in interior space with 93.5 cubic feet of overall passenger space. The large sunroof overhead adds to the overall sense of spaciousness. 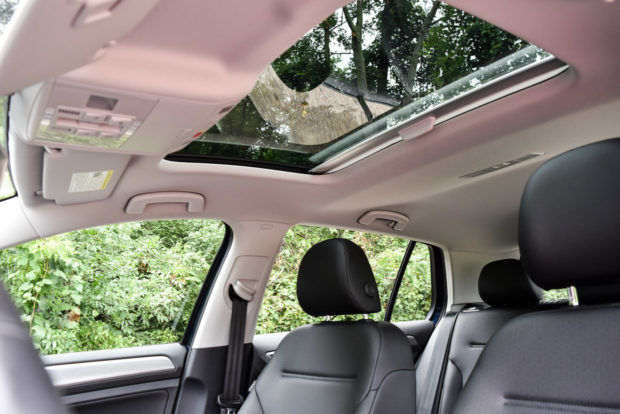 The back-seat legroom and headroom is increased and even that extra half inch in width makes for improved shoulder room. For a compact car, the Golf feels big, while still driving small. Thanks to the hatchback styling, there’s 22.8 cubic feet of cargo room with the seats in use. The back seat has 60/40 split capacity which increases overall cargo room to 52.7 cubic feet of space with both seats folded flat. One nice feature that isn’t seen by other hatchbacks is the moveable rear “shelf” which allows the trunk floor to move up or down by 3.9 inches, which can help with a wide range of cargo loading. Hatchbacks are popular for their versatility, and the Golf is certainly that with its spacious interior. 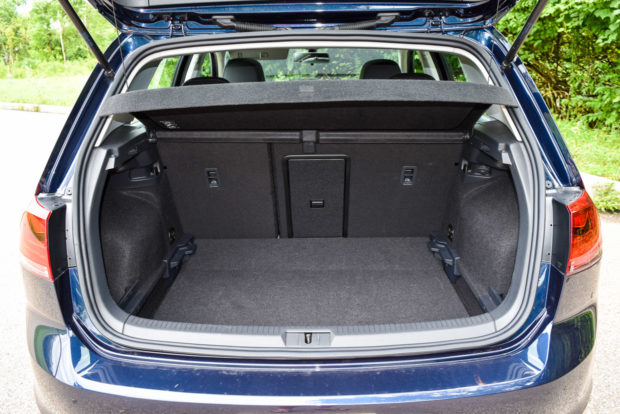 Materials for the top-of-the-line Wolfsburg trim are good, though more sporty than luxurious. The driver-centric front seat offers a great view of the road while the center stack is angled toward the driver, which is smart and a safety feature. There are very few plastic materials used on the Wolfsburg trim which makes it feel more upscale than the price would indicate. The trim accents feature chrome and aluminum which give the Golf a modern feel.

From a technology standpoint, the Golf is by no means cutting edge, but it remains current. The 6.5-inch touchscreen is on the small side and the response times to some touch commands can be slow. But the system is relatively intuitive with a nice combination of buttons and touch menus. There’s both Bluetooth connectivity and a USB port. This year, both Apple CarPlay and Android Auto compatibility have been added. 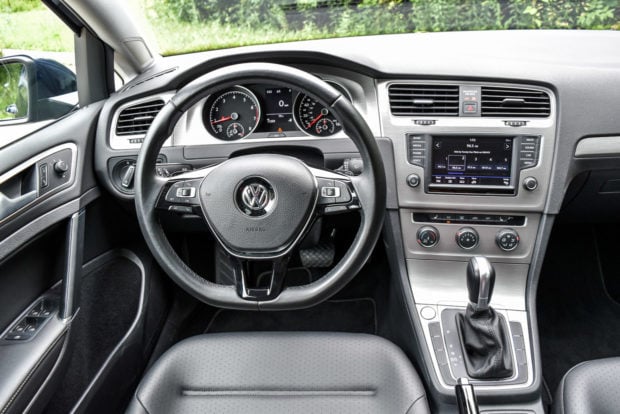 As mentioned, there are fewer trims this year as the Wolfsburg replaces two other offerings. The top-of-the-line Wolfsburg trim gets 16-inch alloy wheels, sunroof, heated front seats and leather upholstery, as well as driver-assistance safety features like front collision warning, emergency braking and blind spot monitors.

The Golf TSI S has a starting price under $20,000, while the Wolfsburg trim with automatic transmission has a starting price of $22,695. There are a few extra options available, but Volkswagen keeps pricing and options simple for this hatchback. The competitive price point keeps the Golf in line and ahead of some of its competitors like the Ford Focus and Kia Forte.

All said, the Volkswagen Golf TSI is a versatile, fun hatchback that provides more room than ever before. It refuses to be pigeonholed with other compact hatches, and thus, this Golf is a bit of a lone wolf(sburg).