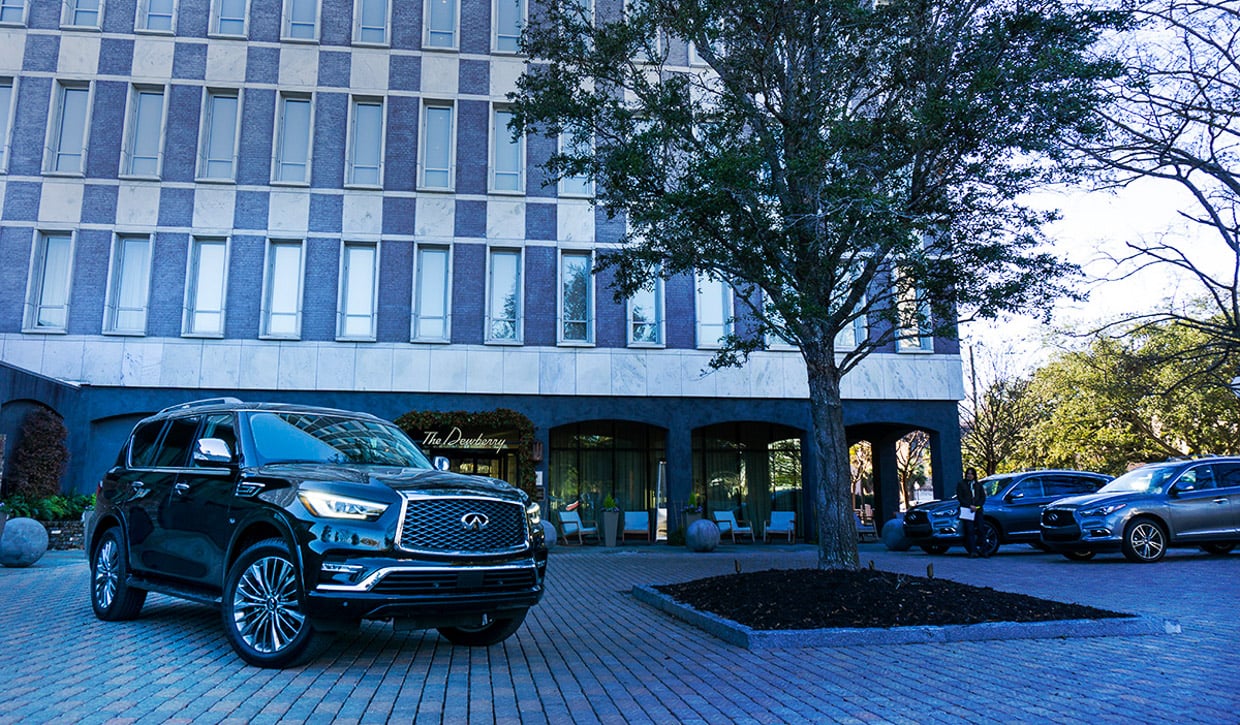 Alfonso Albaisa is a certified design genius, of that I am sure. With a few strokes of the stylus on their computer-aided design system, he and his team transformed the Infiniti QX80 from one of the homeliest vehicles on the planet to a very handsome SUV for 2018.

Since becoming Executive Design Director at Infiniti in 2014, Mr. Albaisa has overseen a massive and hugely successful transition of the brand’s design language. Infiniti cars and SUVs have gone from a line of frumpy, bulbous, and awkward designs that ignited no passion, to a well-defined range of crisp, distinctive, and desirable vehicles. With the introduction of the QX50 at the Los Angeles Auto Show this year and this new QX80, his biggest challenge – both literally and figuratively – his work is complete. It was apparently also successful enough to earn him a promotion to Senior Vice President for Global Design for Nissan Motor Company, putting him in charge of all the company’s brands.

Frankly, the old design of the QX80 was so unappealing, it kept what was an otherwise excellent vehicle from finding the audience it deserved. Now with all new sheet metal from the A-pillar forward and a bunch of other nice exterior tweaks, the ugly is gone and the vehicle’s performance can shine through. It starts with a wider, more elegant version of Infiniti’s signature double-arched grille. It’s still massive, but the more horizontal proportion makes the car feel wider and more balanced. Under the grille, the full-width chrome accent also adds to the visual perception of width, making the car look more planted and confident. 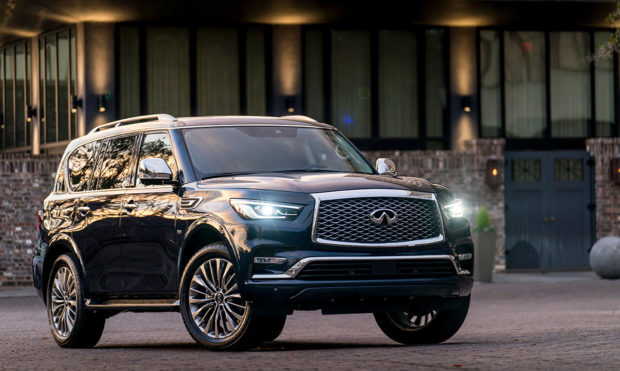 The grille resolves nicely into the distinctive Infiniti headlight cluster which incorporates its LED headlamps and running lights into a more human shape. Placed higher on the fascia, the lights curve nicely into the reshaped front fenders providing an anchor for the tension line that runs along the side of the vehicle to the top of the tail lights. Those fenders have been squared off a bit and are more chiseled, giving the QX80 a more athletic feel. And the hood has been reshaped with subtle bulges hinting at the beefy V8 that resides below it.

Head around to the back past the good looking available 22-inch wheels and you’ll find redesigned tail lamp clusters that integrate nicely into the new liftgate. Those changes, in addition to the cleaner, less fussy finish of the bumper make this one of the most successful design refreshes of an existing vehicle in recent memory. 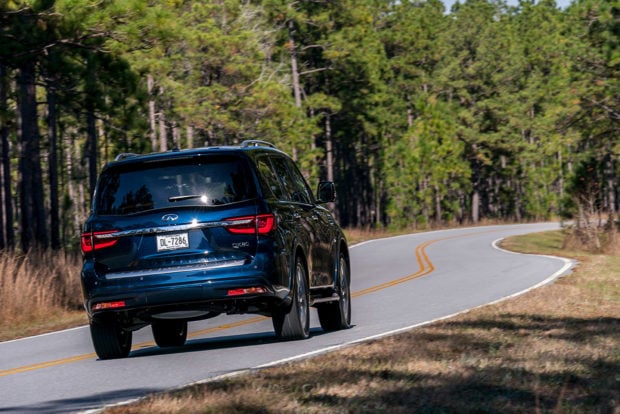 The new design may be the biggest news about the QX80, but it’s not the only update. An interior that was best-in-class gets even better and the suspension has been tweaked to provide a smoother ride and more confident handling. So let’s start with how it drives.

The engine and transmission are unchanged. Delivering 400 horsepower and 413 lb.-ft. of torque, it has plenty of oomph. After I mashed the accelerator and we watched the speedometer climb from 0 to well past 60 on a lonely South Carolina low country back road in a matter of seconds, I heard my drive partner exclaim “That’s definitely adequate.”  The 7-speed automatic transmission pairs nicely with the old-school V8 with ratios close enough to keep you in the power, but tall enough to deliver a reasonable 20 MPG on the highway. 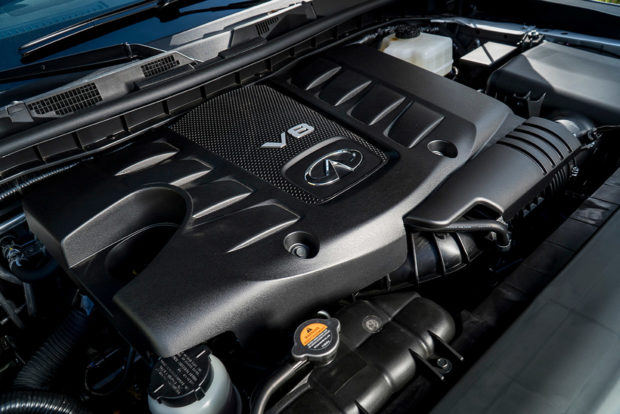 The QX80 comes standard with rear-wheel drive, but most will order it in four-wheel drive. This system uses torque vectoring to bias the power toward the rear wheels for improved performance and handling on dry pavement. When conditions get dicey, the computer goes to work and engages the front wheels help you get through any obstacle you might encounter. The 4WD system also can be operated in high or low speed and has a snow mode to optimize the system when you’re trekking through the white stuff. In addition to all-road and weather capability, the QX80 can also tow up to 8,500 pounds meaning you can take a boat or camper just about anywhere you’d like to go. 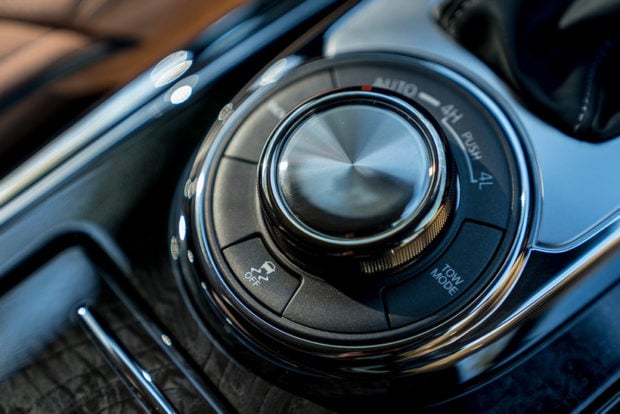 On road, the Infiniti QX80 handles pretty damn well for a 3-ton behemoth. This is due to three things. The body-on-frame structure gives it a rigid and strong platform, the fully independent front MacPherson Strut and rear double-wishbone suspension systems, and Infiniti’s hydraulic body motion control system. The weight means a lot of inertia that minimizes sharp movements over bumps and potholes. The suspension system – tuned decidedly for comfort – allows the wheels to deal with all those imperfections and there’s plenty of travel to soak them up. 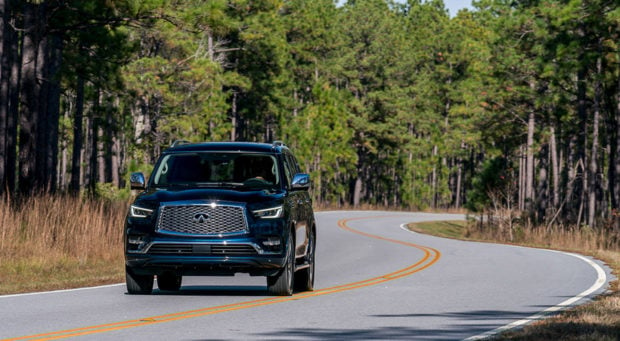 The motion control system employs interconnected hydraulic cylinders which are connected to the shock absorbers. When sensors detect body roll, the system goes into action, adjusting the stiffness on each side of the vehicle so it stays level through corners. The beauty of this versus traditional anti-sway bars is you get better stabilization without compromising the suppleness of the ride, which is really important in the QX80. Yes, it’s built on a truck platform, but nobody who’s buying it wants it to ride like a truck. They want the utility of a truck with the ride of a luxury sedan, and with this setup, you get it. 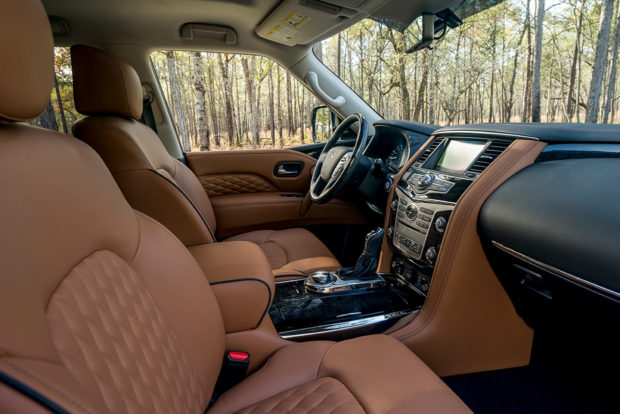 Open the door, climb into the cabin, and the luxury focus of this vehicle is evident. The diamond quilted, heated and ventilated leather seats, available in a new saddle color with contrast stitching, are comfortable and supportive. All the touch points feature high quality materials, whether it’s the soft touch leather surfaces or metallic buttons and switches. The one nit I have to pick is the high-gloss wood surfaces which feel a little dated. I’d much prefer open-pore matte finished surfaces for a higher quality, more natural feel. Second and even third row passengers aren’t relegated to second class citizens. No matter where you’re sitting you get all the leather and all the room. 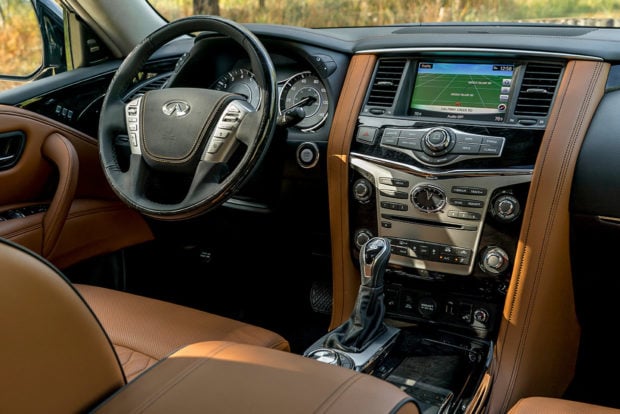 The navigation and infotainment systems have been upgraded to Infiniti’s InTouch 5.0 system, and features an excellent Bose 15-speaker surround sound system. It offers multiple ways to interact with the system including a touch screen that has virtually no lag between your touch and its response. If you prefer there are real buttons and dials on the center stack as well as on the steering wheel, and of course you can use voice commands to perform most functions. Rear seat entertainment options have also been improved with screens embedded into the seat backs. These can be operated independently so each rear seat passenger can enjoy their own content via wired headphones. One nice touch is the “All Mute” button up front. If you want to communicate with your kids who are deep into their movie or game, just press the button and it silences all entertainment systems in the car so you don’t have to talk over anything to be heard. 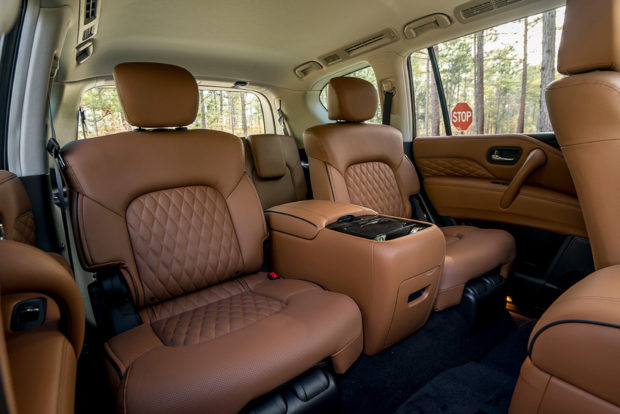 Another piece of technology new for this year is the smart rear view mirror. In normal mode it operates like a traditional mirror, but flip the switch underneath and it become a video screen for a camera mounted just inside the rear glass. This allows you to see behind you even if you’ve filled the cargo area to the roof. Of course the QX80 is also available with a full suite of driver assistance and active safety features including adaptive cruise control, lane departure warning and intervention, blind spot warning and intervention, autonomous emergency braking with pedestrian detection, and predictive collision warning which looks two cars ahead to let you know if someone up there is on the brakes hard. 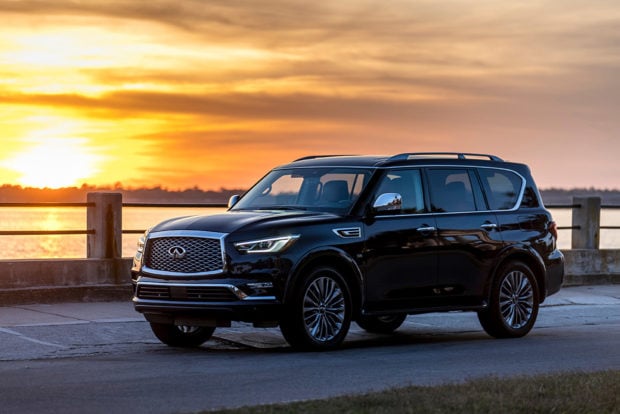 The 2018 Infiniti QX80 isn’t new, but it is definitely improved in all the places that matter most. Especially it’s looks where it went from being the ugliest duckling in the category to a very handsome swan. And with a starting price of $64,750 for the rear-wheel drive version ($67,850 for 4WD) it feels like a bargain compared to the Navigator or Escalade which can touch six figures by the time you load them up. For all those reasons we expect the Infiniti QX80 to be taking a larger share of the 2.2 million full-size luxury SUVs sold each year.