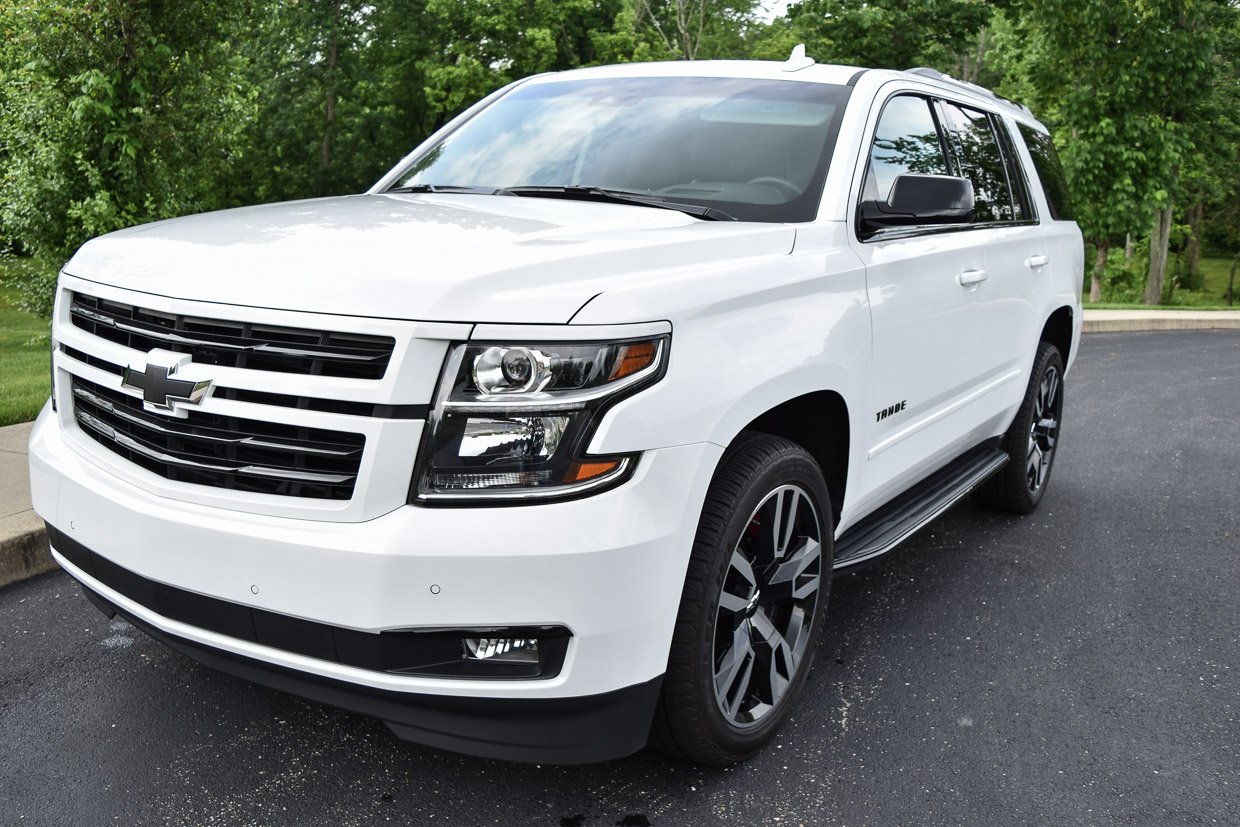 Few things typify the American way more than big SUVs. Just like the big pickup trucks that they share platforms with, the full-size SUV is like a throwback to what the auto industry used to be before crossovers took over. But this doesn’t mean that big SUVs are going the way of the dinosaurs. In fact, carmakers continue to pump money into these behemoths because the market demand is there for those who own recreational vehicles or those who want the extra passenger seating for their family hauler. Enter my tester for the week – a gargantuan of an SUV, and one of the stalwarts of the segment.

The 2018 Chevy Tahoe is a big SUV that sees some big (and much needed) upgrades. The two new upgrades to the Tahoe include an even bigger engine and a new sexy RST trim line. 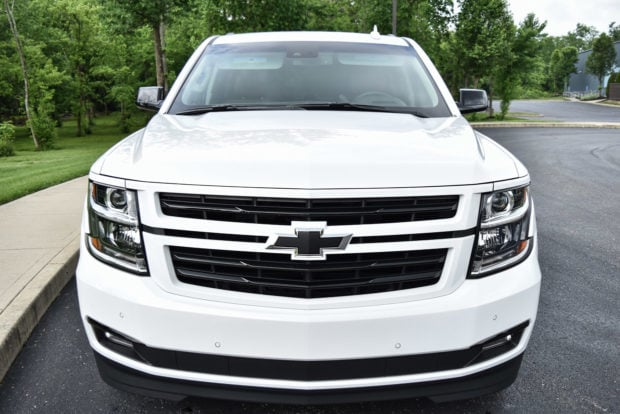 The latter includes blacked out everything, including a gloss black grille with a black Chevy bowtie emblem. My tester had a white exterior that made all of these black gloss styling features really pop. The black aluminum wheels and black mirror caps stood out against the white color, but what added to the beauty and the appeal of the RST trim was the body-color door handles and front headlight accents. Perhaps in a different color it may have been less bold, but with the white exterior, this was one sexy beast. I’ve seen images of the black exterior and the black on black styling is incredibly slick too. Even though this RST edition costs more, from a pure styling standpoint, it’s totally worth it with its eye-catching aesthetics. 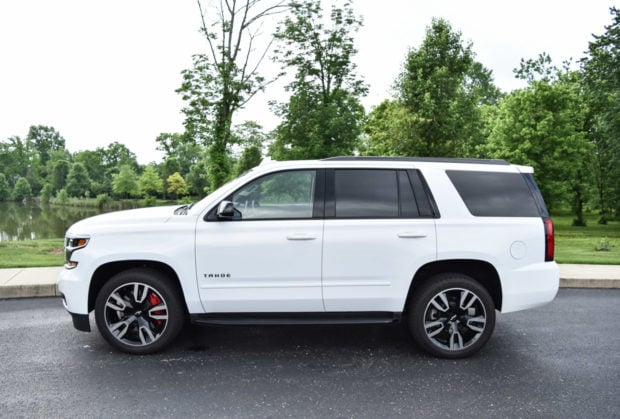 Perhaps just as bold as the styling is the new 6.2-liter engine and 10-speed automatic transmission. Other Tahoe trims only have the standard 5.3-liter V8 engine. The 355 horsepower of that engine pales in comparison to the RST’s 420 horses and 460 lb-ft of torque. For a vehicle that weighs almost three tons and might be used for towing, more power is always better. Six-piston Brembo brakes are available as an option to give this behemoth more confident stopping power. Rear-wheel drive or four-wheel drive is available, but my tester came with the 4WD, which boosts handling and driver confidence.

While the bigger engine means better performance, it also affects the fuel economy. The Tahoe was never a fuel-efficient vehicle, and the Tahoe RST with 4WD has an EPA rating of just 14 mpg/city and 22 mpg/highway. That said, I don’t see how anyone could get 22 on the highway, as I was never able to achieve better than 19 at any given point. For the week I spent with the Tahoe, I averaged just over 17 mpg.

The ride quality of the Tahoe is comparable to many luxury SUVs on the road. The silky-smooth performance is not like a truck at all and that’s a good thing. The Magnetic Ride Control modifies damping based upon road and driving conditions to ensure a cushioned ride for all passengers. The steering is responsive but not too tight, which allows for less over-correction when towing. Obviously for a vehicle that is more than 200 inches long, it isn’t agile and doesn’t have a great turning radius. Parking will be a challenge and the Tahoe isn’t well suited for tight urban spaces or parking garages. 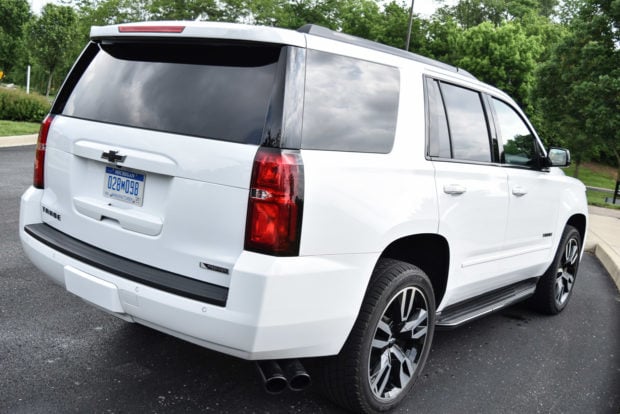 What the Tahoe will excel at is towing. The Tahoe has a maximum towing capacity of 8,400 pounds, making it quite the work horse. A dealer-installed trailer brake controller boosts the Tahoe’s usefulness, and there’s even a 170-amp generator, making the Tahoe even better equipped to be a weekend warrior.

Inside, the Tahoe masquerades as a luxury vehicle. Even though GMC Yukon is supposed to assume that high-end role, the Tahoe can hang with the Yukon and some of the big Japanese luxury brand SUVs too when it comes to interior quality. 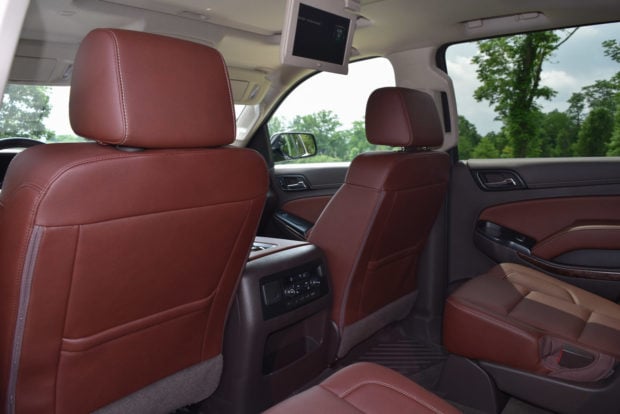 The eight-passenger SUV has soft, comfortable leather seats. The second-row is plenty spacious with ample shoulder and legroom. The big drawback is in the smallish third row. Adults won’t be comfortable back there and even the folding second row has a small opening to enter and exit the third row. This is a typical setup in the large SUV segment and why some opt for the XL versions of the Tahoe and the Suburban. You just might need more room in the third row than it has. 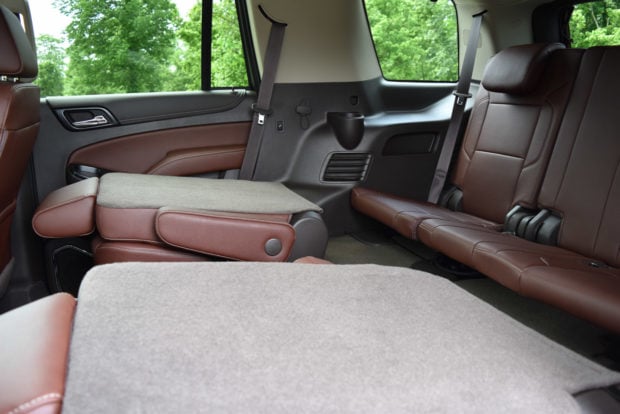 Cargo room with all seats up is very disappointing. There’s just a sedan-like 15.3 cubic feet behind the third-row seats. However, with all seats folded down, you’ll get a cavernous 94.7 cubic feet of cargo space, which makes the Tahoe far more useful. The hands-free power lift gate makes accessing the cargo area even easier. 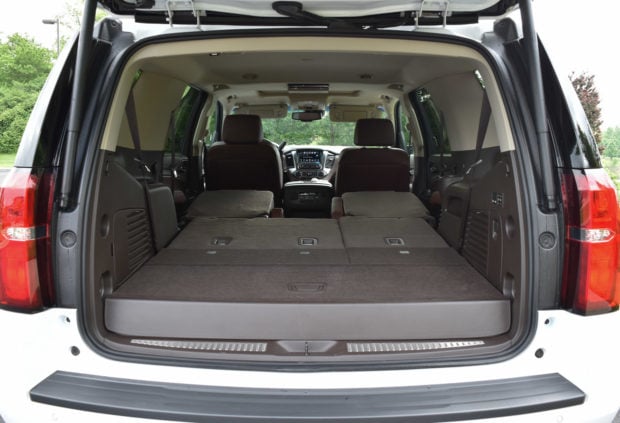 The front seats are both heated and cooled, and the leather-wrapped steering wheel is heated as well. Details like this really stand out, and the entire cabin of the Tahoe is quite impressive. The layout of the center stack is nice and looks good color-matched to the seats. The focal point is the eight-inch touchscreen infotainment system. Chevy’s MyLink system is one of my preferred infotainment systems in the industry. It’s easy to use, and has all the technology you could want, without feeling over-engineered. Plus, it integrates flawlessly with Apple and Android phones through CarPlay and Android Auto. A 4G LTE hotspot can be enabled with a subscription as well. My tester had a rear-seat entertainment system which would appease all passengers for longer road trips. 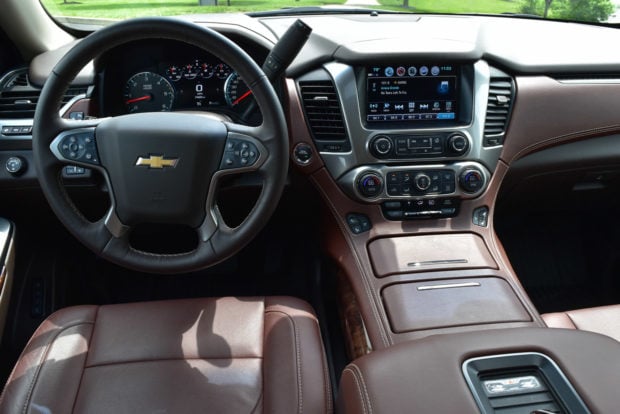 For a big, bulky SUV, safety has to be a priority. In addition to the aforementioned Brembo brakes, the Tahoe has other safety features that offer peace of mind including forward collision warning, low-speed collision avoidance braking, lane departure warning, and blind-spot monitoring.

Similar to how big pickups can get pricey in a hurry, so too can full-size SUVs. The Tahoe in its base trim with 2WD has a reasonable price tag of $47,500. But, my tester had a starting price of $65,130. The extra options including the RST badging, the advanced entertainment system and the Brembo brakes and magnetic suspension (both dealer-installed extras) took the final price of my tester to $78,450. That’s a big MSRP for what’s technically a non-luxury vehicle. Although, as I mentioned, the Tahoe does a good job of justifying the price in many ways with high-end touches and aesthetics. 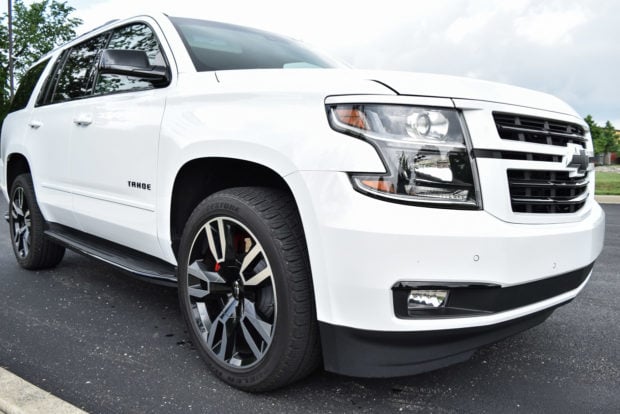 You have to be big and bold to compete within the full-size SUV segment. The 2018 Chevy Tahoe RST is certainly that. It’s got a big engine, aggressive styling, and lots of luxury and tech features. Chevy nailed it with this SUV, rivaling some of the equally bold pickup trucks that seem to be popping up everywhere these days.