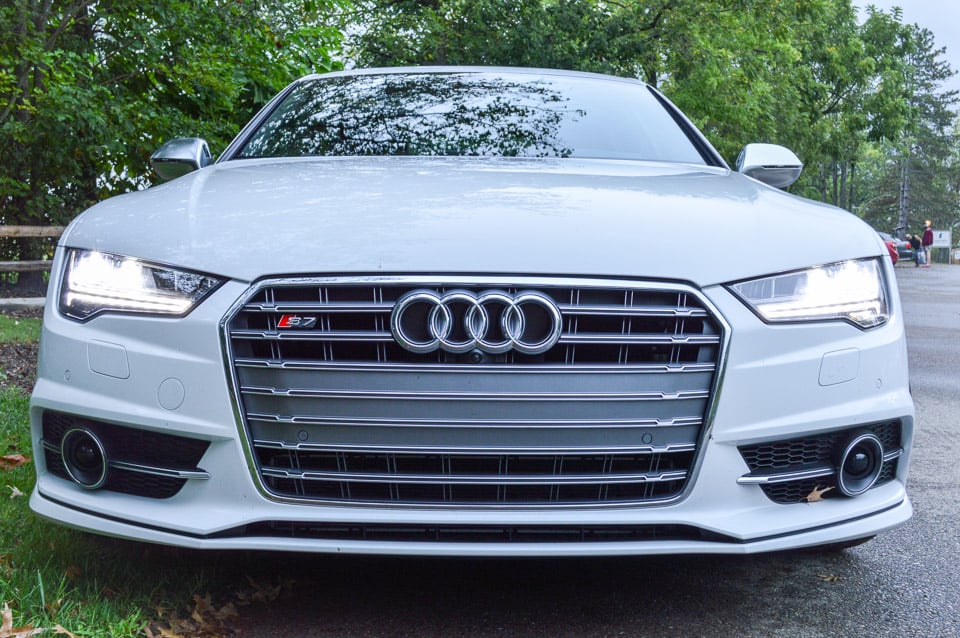 Someone once said to me: “The Audi S7 is just an overpriced version of the A7.” Something more factually incorrect has never been said. While there are significant similarities between the less expensive A7 hatchback, a fine and exquisite car in its own right, the 2016 Audi S7 is most definitely better in all the ways that matter. The 2016 model gets new looks, a more powerful engine and improved technology. That’s the trifecta of awesomeness!

While the S7 and A7 share the same platform, and both have sleek hatchback styling, the S7 features many distinctive qualities that the A7 does not. And this model year, there are many notable improvements as the S7 went through a refresh. 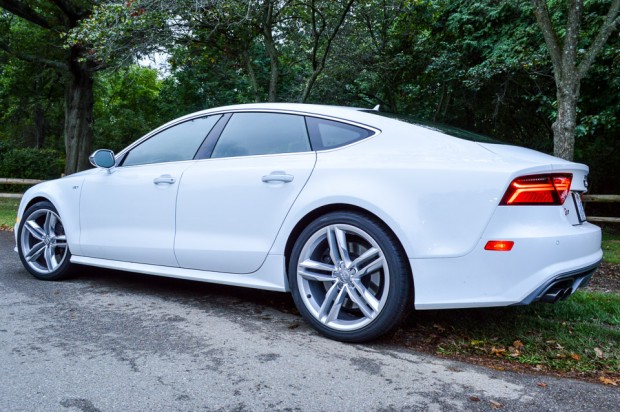 The S7 has all new front and rear fascia. The car incorporates Audi’s Singleframe design in both the grille and the rear bumper. New LED headlights are beautifully incorporated into the new front fascia. The rear LED tail lights are new as well. With the sloped back window leading to the sexy redesigned back end, the S7 looks as good from the back as it does from the front. Not every vehicle can say that.

Trapezoidal tailpipes really add to the aggressive features of the S7, as does the blacked-out grille, which is part of the sport package as are blacked out tailpipes. On the road, the S7 looks just as aggressive, coming and going. And it looks aggressive, because it is aggressive. 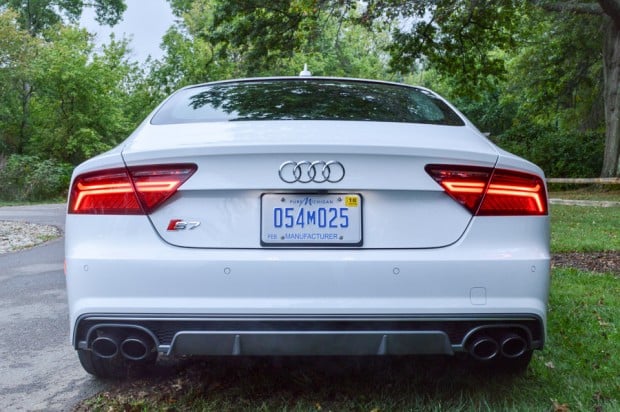 Thanks to its 4.0-liter turbocharged V8 engine, the 2016 S7 now has 30 more horsepower than last year’s mode,l and also makes the 333 horsepower-engine of the A7 look like a child’s toy. The engine of the S7 makes 450 horsepower and 406 lb-ft. of torque. A seven-speed dual-clutch S tronic automatic transmission keeps the power under control and throws out smooth, seamless shifts. Given its large engine and weight, mileage isn’t too bad either. The EPA gives the S7 rating of 17 mpg/city and 27 mpg/highway. In a week’s worth of heavy-footed driving I averaged 21 mpg.

Of course, the S7 comes with Audi’s all-wheel drive Quattro system. According to Audi, the sport differential on the S7 has been recalibrated with new software algorithms to offer the highest level of responsiveness their Quattro system has ever had.

Sometimes when driving a turbocharged engine, there’s turbo lag, but there’s none in the S7. And while there’s plenty of power both off the line and on the highway, the overall performance is more refined. It drives more like a sports car than a muscle car. There’s enough of an engine growl to feel exhilarated, but the entire power plant is quite refined. It’s like this S7 knows it’s a sweet ride with tons of power. It doesn’t need to show it off by growling all over the road. When you want to go, it goes!

Inside, luxury is abundant. While other Audis may be more subtle, the S7 puts its sportiness on full display with jazzy touches like aluminum pedals and footrests, and racing-style leather-clad seats with accent stitching. The quilted seats are plush and comfortable and angled perfectly for driving, and offer a great vantage point of the road. Rear seats have ample legroom, but the headroom can be tough for those over six feet-tall due to the sloped back window and C-pillar of this hatchback. It’s important to note that the C7 is strictly a four-person vehicle as the back seat is just two bucket seats with a console area in between. But they’re comfortable and sit at a good angle.

And because it’s a hatchback, there’s ample cargo space in the trunk. In fact, there’s 24.5 cubic feet of space behind the second row seats which can also be lowered to virtually double the cargo load. 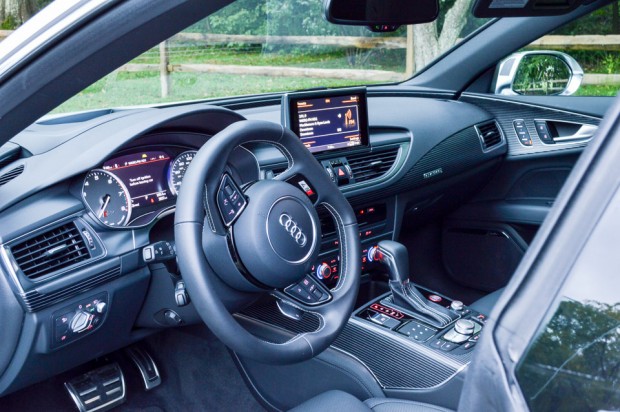 Audis are usually near the top of the technology heap, and that’s generally a good thing. However, many of their vehicles in the past have been almost too tech-heavy and had too many over engineered features that made their interface frustrating to use. Case in point, Audi’s Multi-Media Interface (MMI) infotainment system has been quite cumbersome despite its ultra-cool features.

Audi must have listened to all of us critics, because in the S7, the MMI is much easier to use than before, and the console-mounted control is less sensitive and more user friendly. Also, Audi has added a 4G LTE data connection and a Wi-Fi hotspot to the car. There is also a new suite of apps that integrate with smartphones including live traffic apps and Apple Siri Eyes Free which can read texts to you among other things. 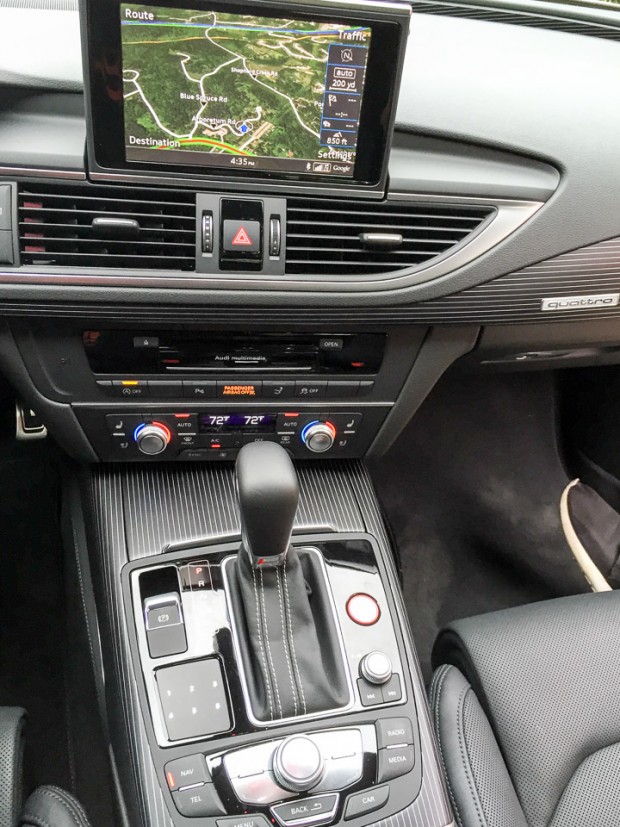 All of this is driven through an 8-inch color touchscreen that sits prominently on the center of the dashboard. Because of its size and position, the screen can be intrusive at times, but thankfully it can retract when you want to be less distracted and focus on this incredible driving machine.

The S7 has plenty of sensor-based driver assistance features that add to the overall appeal of the car. There’s active lane assist, secondary collision assistance, adaptive cruise control, parking assist and Audi’s Night Vision Assistant which is a feature like no other where a thermal imaging camera can highlight objects (pedestrians and animals) on the road ahead and send an audible alert when one is detected. This feature can easily be turned on or off as can most of the other driver assistance features.

There is only one trim offered for the S7, but several options and packages can be added. My tester had the sport package which includes the blacked out grille and exhaust as well as sport-inspired steering package. The aforementioned driver assistance features are part of a package that comes at the cost of $2,450. The comfort seating package includes Valcona leather seats with massage. As someone with a bad back, I love the massaging seats found in many European vehicles, and the ones in my S7 were amazing. You could change the settings to be more gentle, rolling or focus on a specific area. It was definitely worth the additional $1,950. 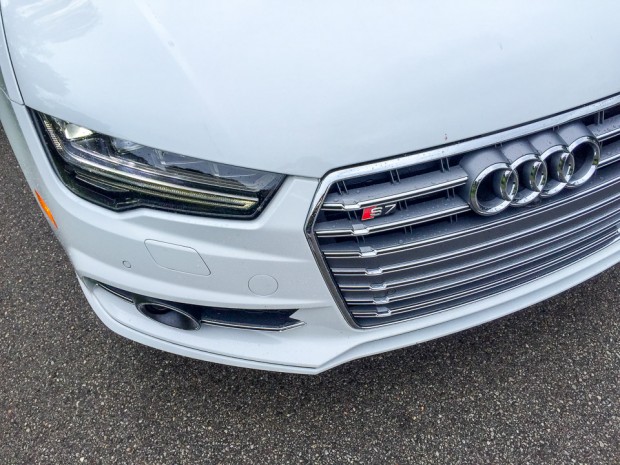 My tester had a base price of $82,900, but with all the added options, it had a final MSRP of $93,825. That puts it in elite company, competing against top-of-the-line European vehicles like the BMW 7-series and the Mercedes-Benz CLS. I always get asked, is XYZ car worth its price?.. and in this case, I can honestly say, yes it is. Now could someone lend me about $90,000 please?

The 2016 Audi S7 is really quite a show off. As nice as its cousin, the A7, is, the S7 is quite the braggart. Everything the A7 has, the S7 has more of it. More power. More luxury. More technology. And in the end, it justifies a more expensive price tag by being so damn fun to drive while sitting in the lap of luxury.

2020 Audi A6 allroad Gets a Lift for Off-road Prowess