Snowed In? Practice Your Drifting Skills!

It seems that every winter these days is the “worst winter ever” for snow or cold. But, getting snowed in doesn’t have to be a drag. In fact, snow can be quite fun. Just ask Tim O’Neil of Team O’Neil Rally School. He seems to enjoy spending time in the snow quite a bit!

What you’re looking at is a Ford F-450 Super Duty dually with a diesel engine that makes an Earth-stopping 860 lb-ft. of torque. Once you add in some fresh snow powder, you have a recipe for awesome!

Tim runs one of the most popular rally schools in the United States, and he often uses Ford vehicles for his training, including the small but versatile Ford Fiesta. Because of his relationship with Ford, it makes sense that his support vehicles would also be Ford trucks. 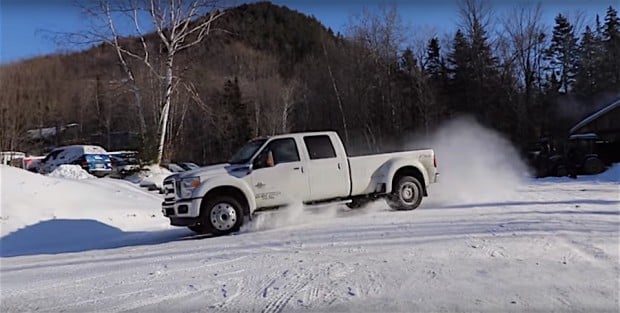 This video also shows that you don’t have to be some sort of professional rally driver with an rally-spec car to have some fun in the snow. Yes, Mr. O’Neil is a rally driver, but there aren’t too many people outside of the flyover states that would consider taking a one-ton dually pickup truck around a rally stage. For that, I commend him.

Just please make sure, if you are going out in the latest snowfall to have fun in your ride, make sure you’re not doing it on public streets where people can get hurt. Please snow drift responsibly!