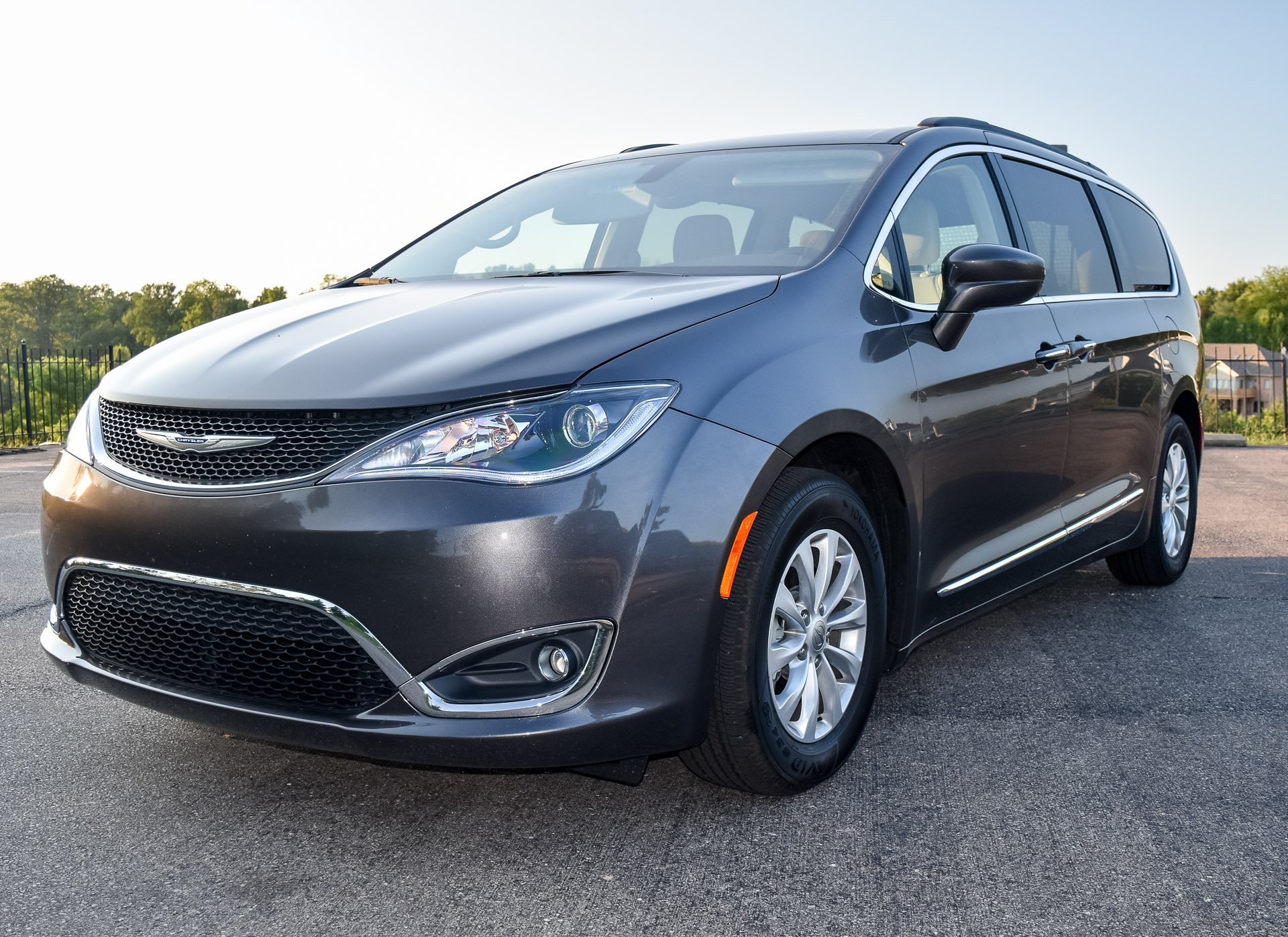 Don’t get me started on vehicle names. Between crazy numbers, nonsensical letter combinations and just weird names, I can never make rhyme or reason of why a vehicle gets tagged with a certain name. So when Chrysler unveiled their new upgraded minivan at the Detroit Auto Show, I was excited to see the new Town & Country. Wait, it’s not called that any longer? They brought back the Pacifica name? The same Pacifica that was boring as a crossover?

While the minivan segment has become stagnant and is the least glamorous segment in the industry, it’s still vital to many car makers. At the aforementioned Detroit Auto Show, the Pacifica created a lot of buzz. The new appearance was dramatically different, and injected some excitement back into the minivan segment.

On looks alone, the Pacifica doesn’t look anything like the old Town & Country. The redesigned exterior hits the mark. Its sleek, curvaceous exterior is instantly better than any of the other minivans in the segment, including the two leaders – Honda Odyssey and Toyota Sienna. The Pacifica has a lighter overall body than the Town & Country, which helps improve fuel economy, but is all part of the new-look, sleeker appeal of this minivan. 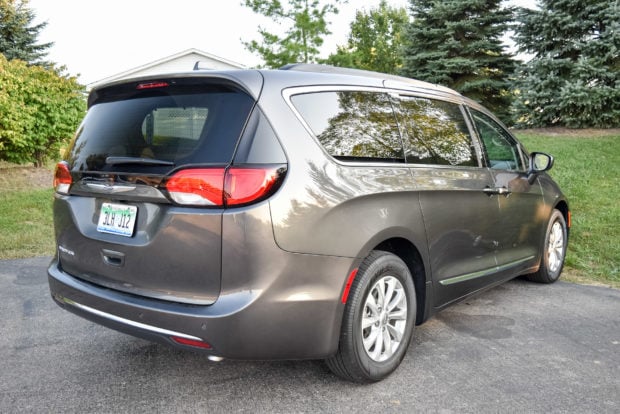 Lines on the hood give a streamlined effect. The pointed front end is modern. Framing around the window give a nice geometric sheen and angle toward the attractive back end. The slightly bulbous back end of the Pacifica is its best feature. A small spoiler adds some sport appeal while the side panels and pillars all work congruently in the flow of this minivan.

As you whisk your family away to soccer practice or a school event, the Pacifica does so with a much improved engine. There’s a standard 3.6-liter V6 engine with a nine-speed automatic transmission. Power output is impressive with 287 horsepower. The Odyssey is more powerful, but when compared to how boring the Town & Country used to be, this is a huge improvement for Chrysler’s minivan. The lighter weight makes it feel like it handles better. It doesn’t drive boxy or long. The Pacifica feels more like an SUV from behind the wheel. The steering is incredibly responsive and confident. Even the engine noise is less noticeable (which is something Chrysler has been criticized for in the past).

Off the line, the Pacifica is powerful enough to merge into heavy traffic. At highway speeds it’s smooth. Start-stop technology is available to help improve fuel economy. Overall, the Pacifica is significantly better than any minivan produced by FCA in years and can rival Sienna and Odyssey in driver confidence and performance.

Let’s get real though. What little cache a minivan has is in the interior. With sales having dropped over the years, minivans have had to resort to gimmicks and convenience to add to their appeal. And in the world of minivans, the Town & Country was always known for Chrysler’s innovative Stow N Go feature. Thankfully, Chrysler continues this in the Pacifica, which allows for the second row seats to be folded into the floor flat. 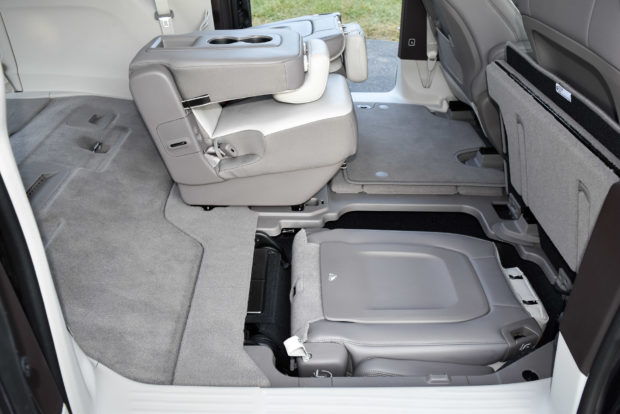 This year, the Stow N Go feature is improved upon with a one-button system. It’s further improved by the easy-to-open, sliding passenger doors. Overall, cargo room for the Pacifica is 140.5 cubic feet (that’s with second and third row seats folded flat). Behind the third row is 32.3 cubic feet of space. Both of these storage numbers are less than the Sienna or the Odyssey, but are better than last year’s Town & Country. 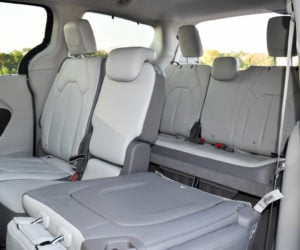 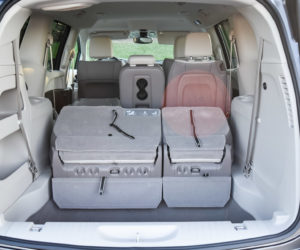 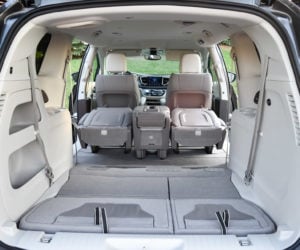 Passenger comfort is important for minivan buyers. The front seats are soft with ample headroom. The second row seats are totally redesigned to make way for the new Stow N Go features, and as a result, they’re a little firmer and a little less comfortable. But, the headroom and legroom are phenomenal and should help minimize bickering between siblings on those longer road trips. 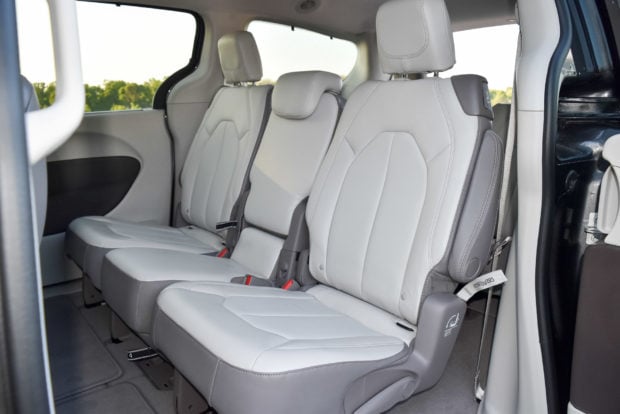 Knocking off Honda’s in-van vacuum feature, Chrysler offers an optional stow away vacuum system called Stow N Vac. It can reach all corners of the van and is only good for dry messes – but that’s still better than having to go to the car wash every time there’s crumbs on the floor. This feature will resonate with many minivan buyers, but is only part of the top-of-the-line trim at this time.

There’s an 8.4-inch touchscreen in the Pacifica, and it uses Chrysler’s UConnect infotainment system, which I love. It’s intuitive, cleanly presented and has all the features you could need. There are four total USB connectors, showing that Chrysler understands the importance of smart device connectivity to today’s consumer. There’s an optional entertainment package that features a DVD and HDMI hook up to help entertain the kiddos. And, connecting their devices is easier than it’s ever been. In the base trims, there’s only a five-inch touchscreen which has far fewer features, so that may disappoint some buyers. 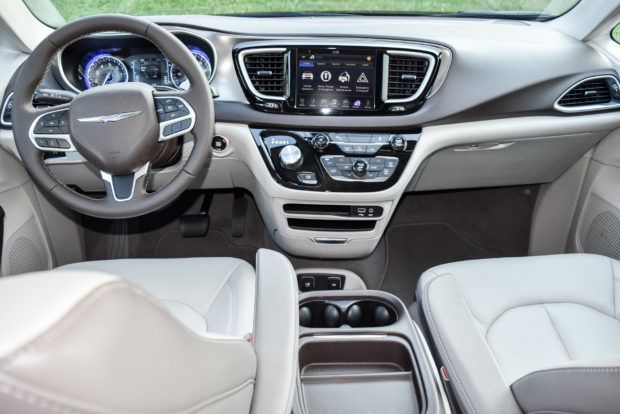 With the lighter body and drop in weight, the Pacifica is the most fuel-efficient minivan offered by Chrysler, and is tied for best fuel economy with the Odyssey. The Pacifica has an EPA rating of 18 mpg/city and 28 mpg/highway. In a week’s worth of driving, I averaged 22.3 mpg. There is a hybrid version of the Pacifica due out soon that’s expected to achieve phenomenal fuel economy with a battery-powered system that offers an additional 30 miles of fuel-free driving.

There are five trim offerings for the Pacifica. The base LX starts around $28,000(USD), keeping the price in line with where the Town & Country started. The other four trims are Touring, Touring L and Touring L Plus. My tester was the Touring L which comes with leather, heated front seats, blind spot monitors (much needed), a power, hands-free liftgate, remote start and sun shades for the rear passengers. The Touring L has a starting price of $34,495. With optional equipment including the 8.4-inch touchscreen, 13 speaker Alpine sound system, and advanced navigation system, my tester had a final MSRP of $36,880. 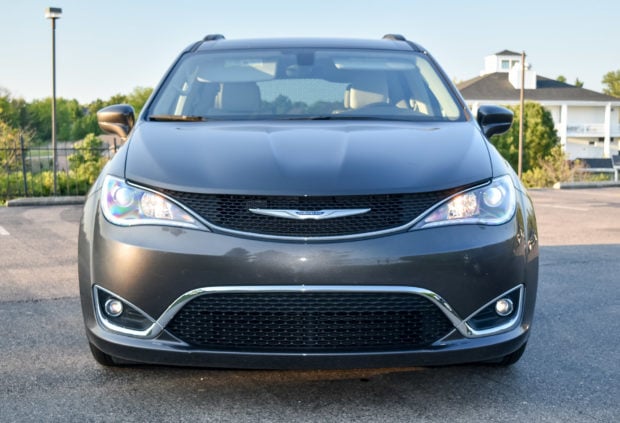 Forget the name and any negative feelings it may invoke. The Chrysler Pacifica raises the bar in the flailing minivan segment. It challenges its rivals and has the chance to reinvigorate soccer moms and dads to consider a minivan again, rather than just looking at SUVs and crossovers.