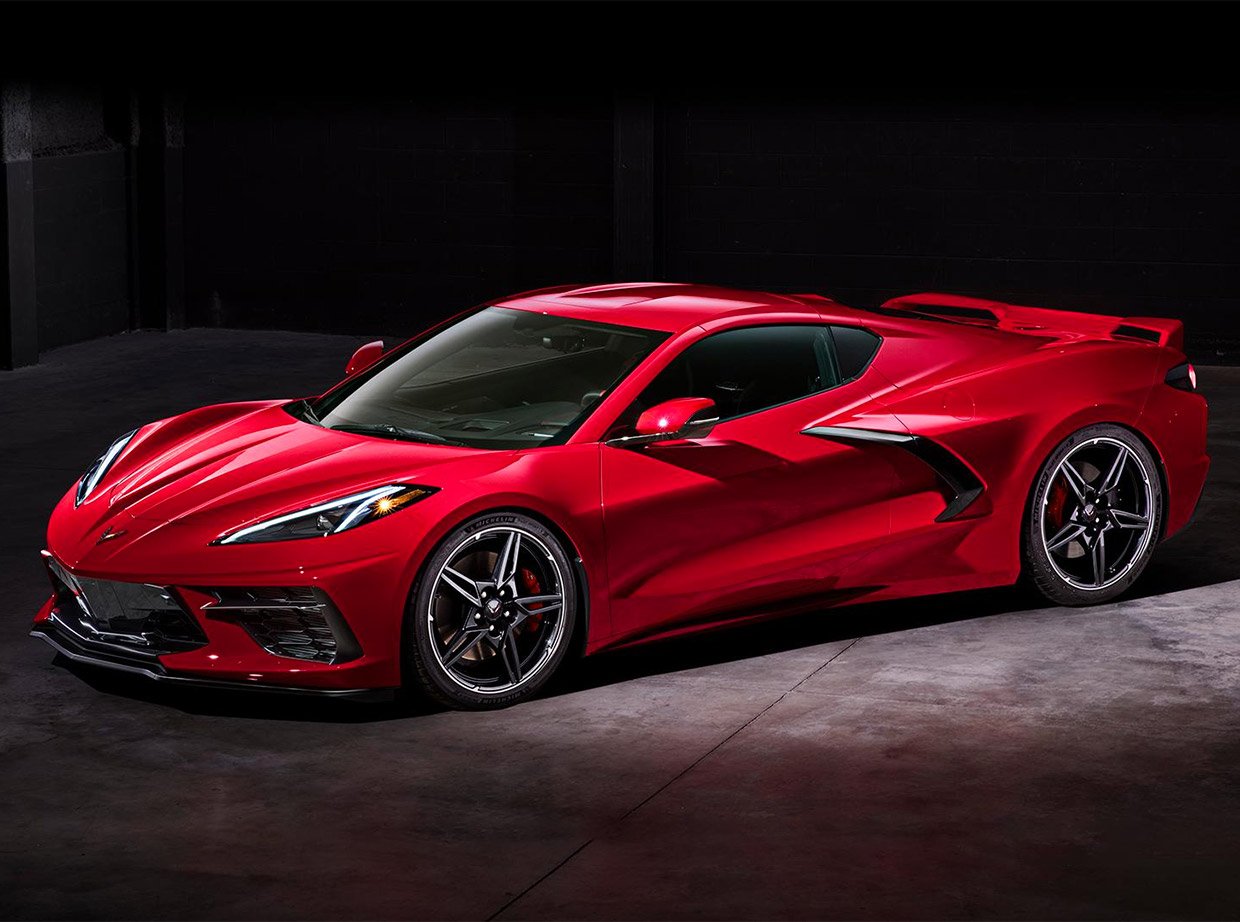 After years of speculation that Chevrolet would build the mid-engined Corvette that Zora Arkus-Duntov dreamed of, that day is finally here. The 8th-generation Corvette Stingray is different from top to bottom, riding on a completely new platform. It’s a pretty big risk for Chevrolet to take, given the fact that the C7 was damned near perfect – especially in Grand Sport form. But Chevy says that they had reached the limits of a front-engine configuration, and the mid-engine design means better balance, a stiffer body structure, resulting in better overall handling.

The C8 Corvette is unlike any before it. Sure, it still has a V8 engine and the iconic Corvette logo, and will be built in Bowling Green, Kentucky, but those are about the only similarities it bears to past ‘Vettes. As you can see from the photos here, the new model features an even more dramatic design than the C7, with more aggressive angles everywhere. 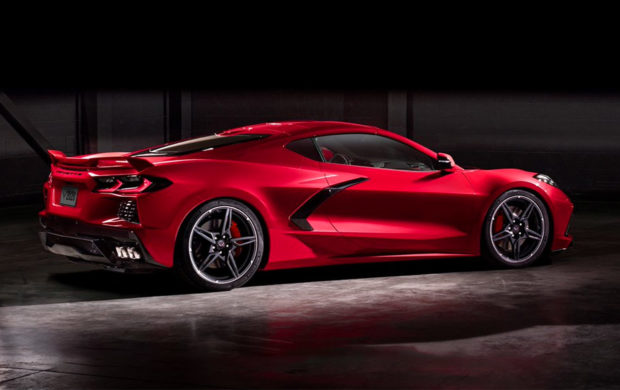 The sloping front end bears the greatest resemblance to prior-gen Corvettes, but as you move further back, the departure is substantial. Because of its mid-engine design, its hind-quarters appear to be much wider than the front of the car, and its roofline is much longer, along with a more cab-forward layout than ever. I dig the way they integrated the Stingray logo into the rear behind its awesome see-through engine compartment. Yes, I said see-through engine compartment. 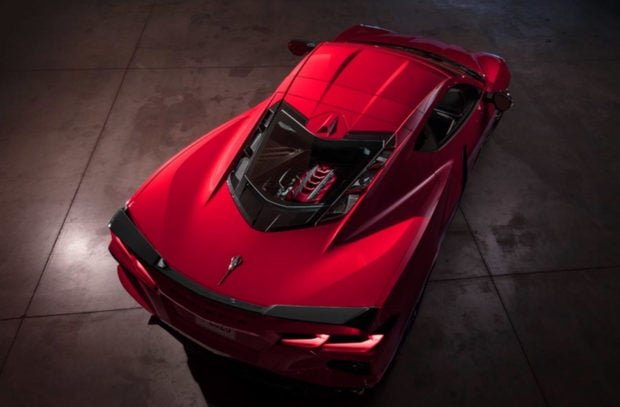 The side profile shows off big intakes to help bring air into the engine compartment, while its rear end is more Camaro than Corvette than ever, with its sharp creases. I’m still not 100% sold on that part of the design, especially the emphasis on the license plate area, but the C8 looks pretty great from every other angle. 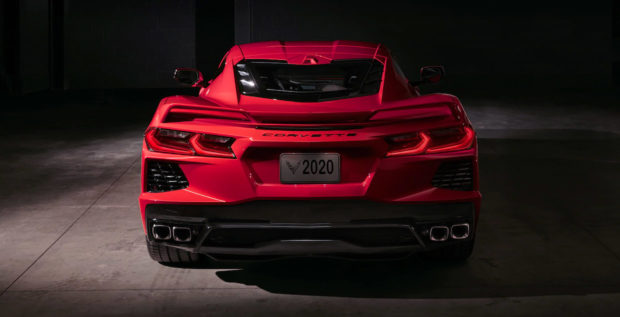 Also notice how the center-mounted quad exhaust from the C7 has been replaced with small, squared-off pipes at the left and right sides. Those interested in letting some wind into the cabin will be happy to know that a removable roof is still standard – and it fits into the trunk behind the engine. Up front, there’s now a “frunk” for carrying small items as well.

In terms of drivetrain, the base model Stingray starts out with a new V8, dubbed the LT2, which sends 495 horsepower and 470 lb-ft. of torque to the rear wheels. It’s the first Corvette to come standard with a dry-sump oil system to ensure that oil flows smoothly through the engine at high speeds. Tricked out with the Z51 Performance Pack to enhance the ‘Vette’s cooling, suspension, braking, exhaust, and adds a limited-slip diff, it’s said to do 0-to-60 mph in under 3 seconds with launch control mode engaged. I can only imagine how fast the eventual C8 Z06 and ZR1 variants might be, should Chevy decide to apply a supercharger to the V8. 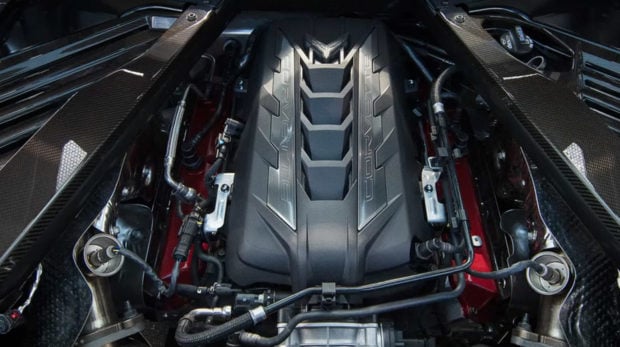 One area that’s certain to generate controversy is that the Corvette won’t be available with a manual transmission for the first time ever. Instead, it will come only with a dual-clutch 8-speed automatic, designed by Tremec. The move away from manuals is consistent with European high performance exotics, so it’s not exactly surprising that Chevy has finally ditched the manual too. At least there are paddle shifters if you want to engage in the gear selection process. A new version of Chevy’s already impressive Magnetic Ride Control is also available.

Another slick feature is the ability to raise the nose of the Corvette up to 2 inches to get over speed bumps and other urban obstacles – this is tied into a GPS system which can store up to 1000 locations and automatically lift the car when approaching marked obstacles. 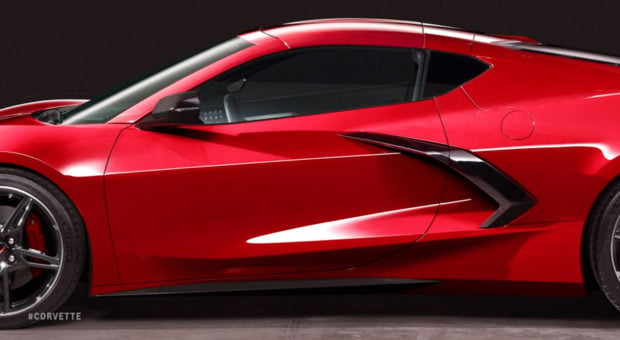 The interior of the new Corvette is about as driver-focused as we’ve seen, with a full digital instrument panel, and a touchscreen infotainment system that’s angled much more towards the driver than most. The new steering wheel looks great, with flat edges on both its top and bottom, and there’s a one-touch “Z” track mode button to quickly prepare the car for optimal track handling. The gear shifter has been replaced with pushbutton switches, streamlining the looks of the center console, and by moving all of the climate control buttons to a vertical strip along the right of the console, the were able to clean up the look of the dashboard, while not losing tactile controls. Chevy also says this Corvette will be available in a right-hand drive configuration for countries that drive on the left side of the road. 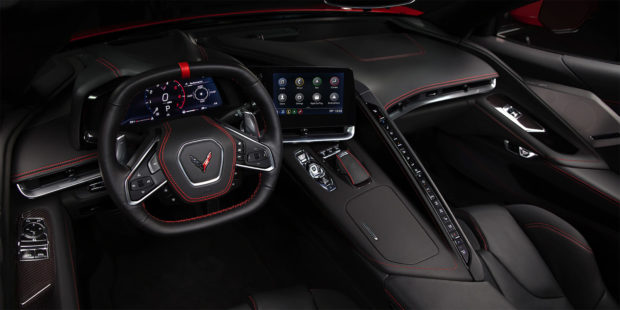 Detailed pricing has yet to be announced, but Chevy shockingly revealed that the C8 Corvette Stingray will start under $60,000. The first cars will hit dealers starting in early 2020. Buyers can reserve their new Corvettes on the Chevrolet website starting today.