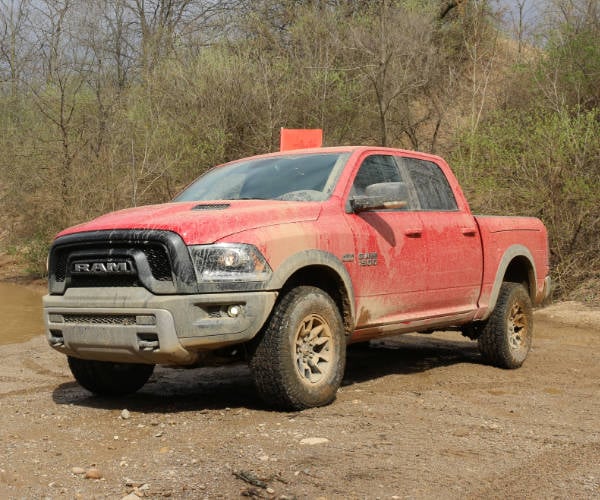 When Ram Trucks debuted the Ram Rebel at the 2015 North American International Auto Show, people were a bit confused on what the truck’s competition was. Ram made it quite clear that it was not designed to be a Ford Raptor competitor. But what was it? Recently, I spent a week with the truck, doing everything from running errands to heading to an off-road park for some serious wheeling. I believe now I have a much better idea of what this truck is, and who it’s for. 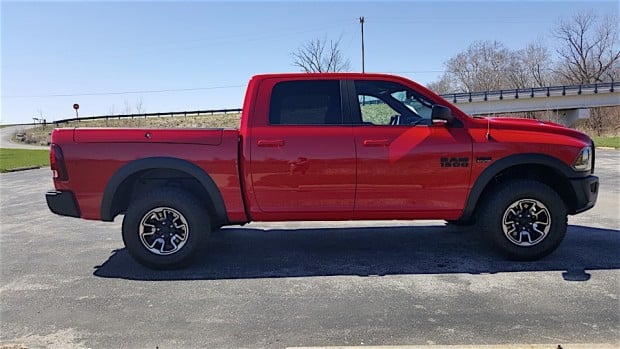 Ram spokesperson Nick Cappa explained it to me shortly after the truck debuted where they saw the truck in the marketplace. If you drive by a local dealership, there are often one or two trucks parked out front that the dealership added a lift to and changed the wheels and tires. That’s fundamentally what Ram has done here, except they’ve done it from the factory. 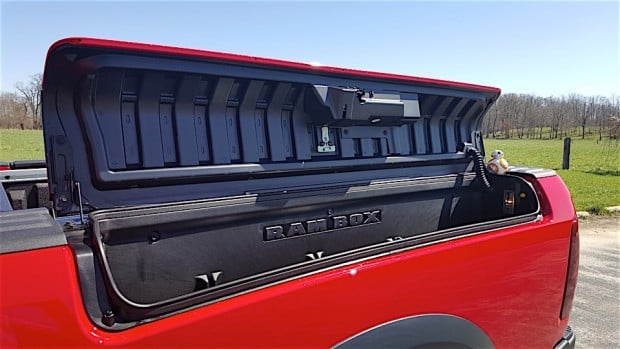 The Rebel is a basic 1500 short-bed truck with a crew cab as the only option. The truck is lifted an inch thanks to a neat trick with the standard air suspension. In a normal Ram with air suspension, there are two off-road settings. In the Rebel, there is only one. The “Off Road 1” setting is the “Normal” setting on the Rebel. That allows them to fit 33-inch Toyo Open Country A/T tires. 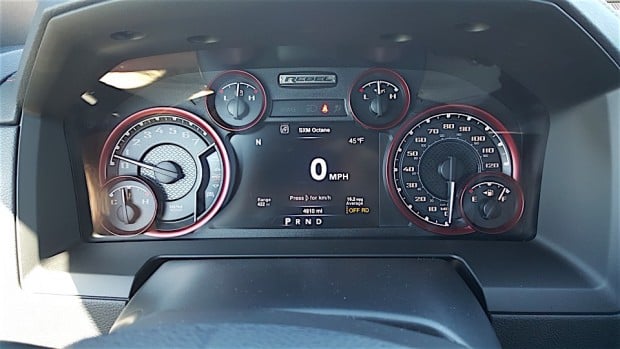 The 2016 truck comes with the 5.7L HEMI V8 as the only option, making 395 horsepower and 410 lb-ft. of torque. You can purchase the Rebel with either two-wheel or four-wheel drive. Obviously you want the 4×4. Duh.

Without checking a few option boxes, those are the only functional changes to the truck. The rest of the changes are cosmetic, and there are a few to take note of.

The crosshair grille that adorns modern Rams has been replaced with a new grille that says RAM on it. The rear tailgate has RAM in gigantic lettering. Nobody will question what brand of vehicle you’re driving when you’re driving this truck. Blacked out headlights, badges, and taillights make the truck look sinister. 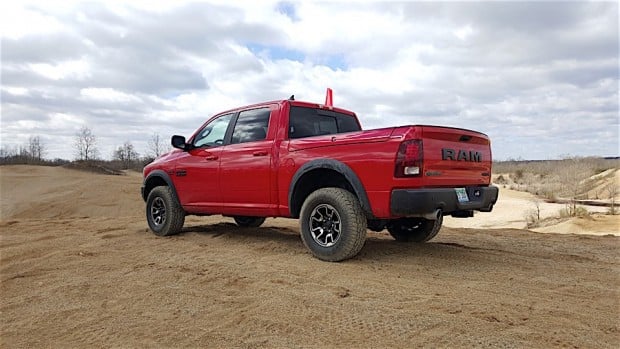 Inside, the red and black treatment is carried over in the stitching and the seats. The cloth seats actually have the tire tread imprinted on them for a neat touch.

Of the options available, you want to make sure you select the Protection Group for $150 that includes the necessary skid plates, and $370 anti-spin rear differential. Beyond that, you can spec the Rebel with some nice comfort features. But none of those are strictly necessary if you’re looking to off-road. 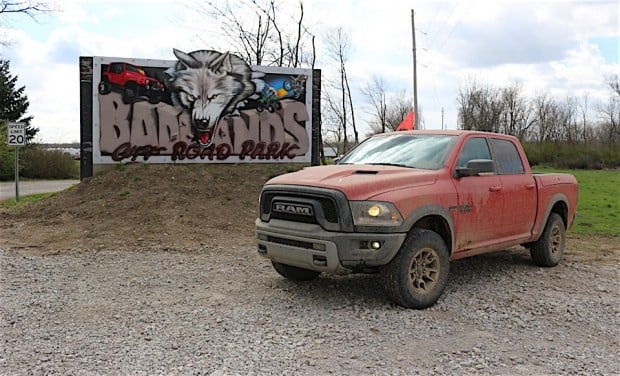 And off-road we did. Located outside of Indianapolis, Indiana lies the Badlands Off-Road Park. While geared towards ATVs and bikes, the park does offer some unique challenges for pickup trucks and Jeeps. We filled up the $1,295 RamBox with ice and beverages and entered the park. 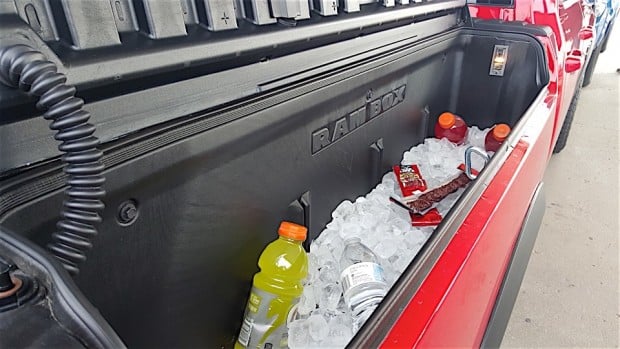 The Rebel handles broken tarmac with ease. The air suspension absorbs a lot of the bumps and gives you a relatively smooth ride. As long as you don’t exceed about 20 miles-per-hour in the “Off-Road” setting on the air suspension, it’ll stay at the maximum ride height. Dirt and sand also didn’t give the Ram much to worry about.

Unlike some off-roading trucks, the Rebel doesn’t have any fancy off-road modes. It doesn’t even have hill-descent control. But the traction control is tuned well and the truck offers plenty of grip. A low-range gearbox also helps if you’re going to do some crawling.

There’s very little that will slow the Rebel down off-road, but it isn’t perfect. Since Badlands is geared towards ATVs and bikes, some of the trails are pretty narrow. While the Rebel doesn’t feel that large in day-to-day driving, it feels ginormous on those trails. My friend, who was in a Tacoma TRD, found it easier to navigate those trails, but even he had issues. 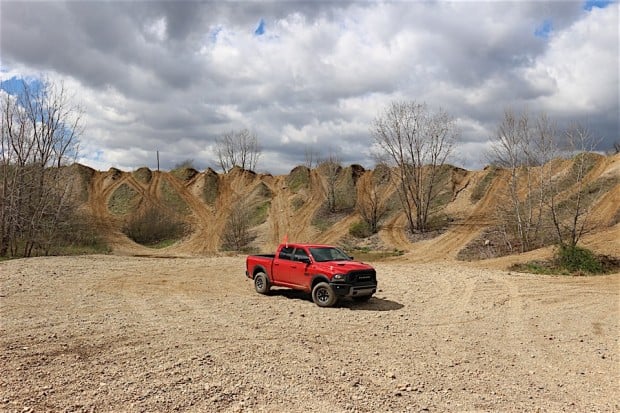 While I didn’t say anything else was strictly necessary to off-road, I’d suggest getting the $595 rear parking aid and backup camera package. I just wish the truck had a forward-facing camera, like the Raptor does, for the really narrow stuff.

Perhaps the closest comparison to the Rebel is the Toyota Tundra TRD Pro, which has a V8 mated to a TRD-tuned exhaust, which admittedly sounds better than the stock exhaust on the Rebel. It also comes at a lower price-tag than the Rebel, making it quite a deal. 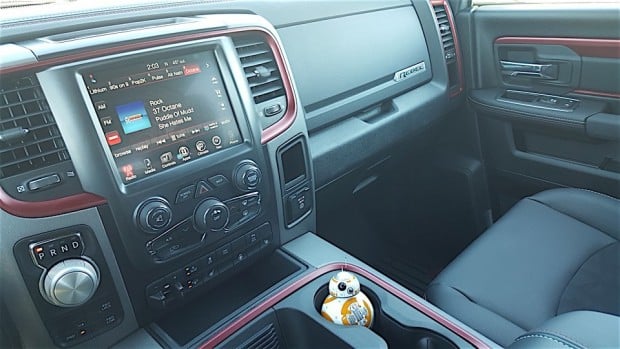 But living with a truck every day I do prefer the Rebel. On the road, the air suspension makes the truck ride quite smoothly. The optional RamBox cargo management system is worth every penny. Plus, the Uconnect infotainment system is superior to what Toyota offers. Finally, the Rebel’s 8-speed automatic allows for better fuel economy than the TRD Pro Tundra. Both are great trucks, and I’d strongly consider the Tundra TRD Pro, especially for the price. Just I think I like the Rebel a bit better

On my not-industry-standard fuel economy run, I managed to get 20.7 mpg out of the Rebel. Throughout the week, my overall average was 15.6 mpg, but you have to remember that included the off-road day. The EPA rating for the Rebel is 15 mpg in the city, 21 on the highway, or 17 mpg combined. 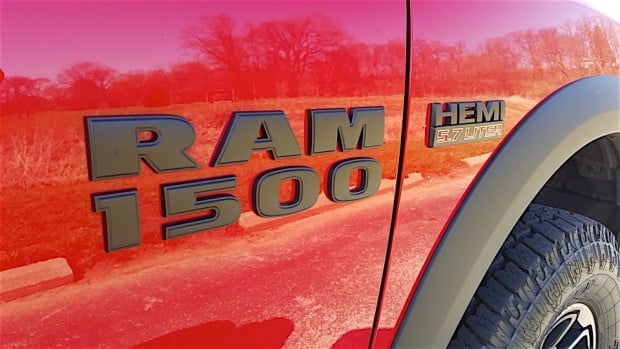 The Rebel isn’t a cheap date. My review unit has a MSRP of $53,275(USD) including the $1,195 destination charge. Also, the Rebel doesn’t have some technology, like blind spot monitoring or LED headlights, that some of the competition offers.

In the end, the Rebel is a capable off-road truck for what most people would consider off-roading. If you want something more serious, Ford will sell you an updated 2017 Raptor later this year. But as a day-to-day truck, the Rebel has the looks and the performance to set it apart from many of the other trucks that are currently on sale, which also explains why the Rebel is the fastest-selling truck in the Ram lineup.