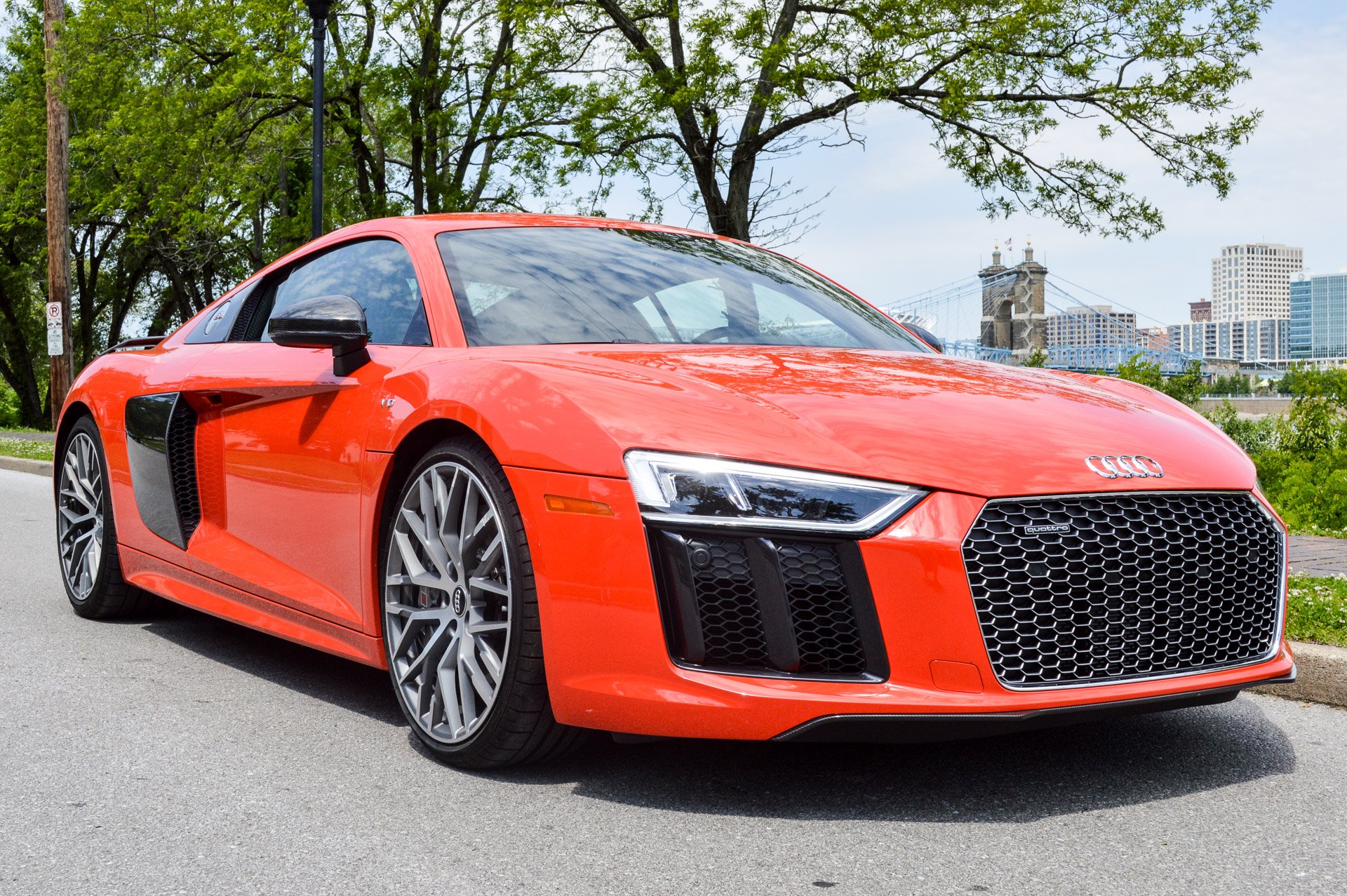 Whoever says money can’t buy happiness lied. Because if you have roughly $200,000 to spend, you can buy a lot of happiness and a lot of horsepower. I was fortunate enough to spend a week with the 2017 Audi R8, which offered up plenty of happiness. Prior to this, the R8 was always the one car I never got to review, but always wanted to. Bucket list item checked off. Dream come true.

This special supercar made me feel special. People stared and took pictures of it constantly. I’d drive down the highway and see a cellphone hanging out a window to get a photo of this sexy beast. At red lights people wanted me to rev the engine. Any time I stopped, people wanted to talk to me about it. There was even a neighborhood person who was taking regular Snapchat photos of the R8, as it was parked in my driveway. That was a little creepy, but I get it. 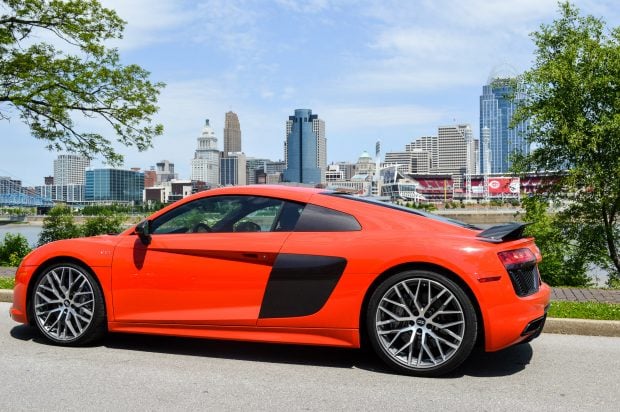 I even picked up my 14-year-old daughter from her school dance in the R8. As I pulled up to her middle school, everyone gathered around. Needless to say, it was a cool moment for her and I think I gained some cool dad points too (which are hard to come by). Another similar scenario played out when I picked my nephew up from high school. People were even staring out the school windows and pointing. Now, I’m the cool uncle!

Yes, the Audi R8 is special. And rare. And amazing. And honestly, I can’t fill 95Octane with enough superlatives and adjectives to describe the R8. 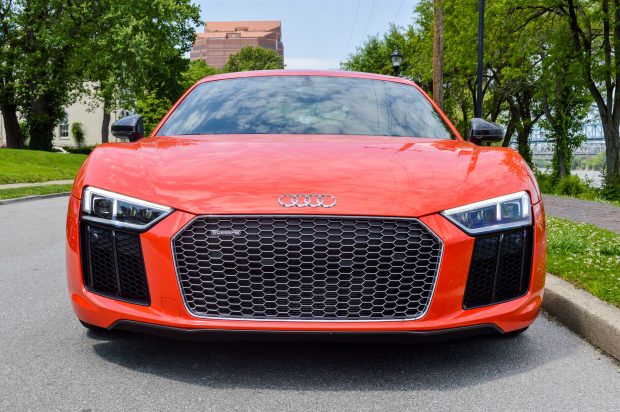 For this model year, the R8 got a big overhaul. Gone is the V8 engine, replaced by two different V10 engines. There’s a aggressively-styled new grille with sexy LED headlights on the side. In Europe, the R8 has laser headlights, but sadly those are illegal here in the states. Gone is the manual transmission, which surely will disappoint many enthusiasts, but there are still paddle shifters which work great (this coming from a person who generally despises paddle shifters). The best new feature is the dynamic driver control, which allows for the customization of the car’s performance, including steering, and also adjusts for varying road conditions (including snow). I could not imagine driving this powerful, low-profile beast on snowy roads, but man would that be fun!

The 2017 R8 is a supercar. Nothing about it is subtle. It takes the prior generation’s aggressive styling and goes even further with it. There are carbon fiber accents all over, including on the spoiler, the side blades and on the rear diffuser. The R8 has always been compared to the Lamborghini Huracán, and now with the redesign it looks even more like it, yet still has its own distinction. 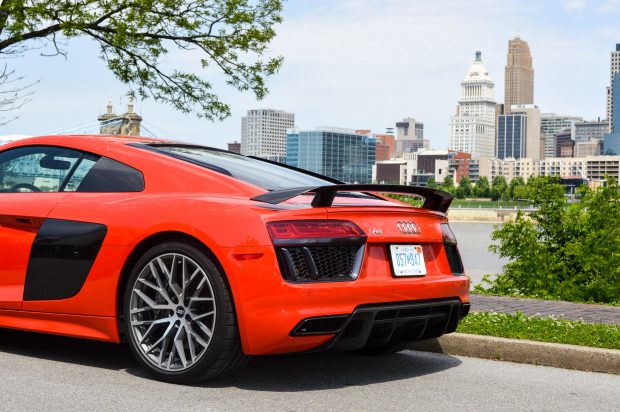 For this model year, the new R8 is 1.6 inches wider than before. Big side vents aren’t just a gorgeous aesthetic feature; they help cool the powerful engine. Even the 20-inch wheels are a work of art. The speed-oriented back end features a fixed black matte lip spoiler. There are more LED lights added to the back. The twin-trapezoidal exhaust adds to the looks, but also helps with the engine tuning. You can actually tune the sound of the engine with a custom setting inside the R8. I left it on sport tune (do I really need to explain why?)

The new Audi R8 is what all supercars should look like. Even if you didn’t know cars at all, just looking at it, you knew it was a real badass. That said, a car can look the part all it wants, but if it can’t back it up on the road, what’s the point? The R8 doesn’t disappoint on performance. As mentioned, the V8 engine from the previous model year is gone, replaced by a naturally aspirated mid-mounted 5.2-liter V10. In the V10 model, you get has 540 horsepower and 398 lb-ft. of torque while the V10 Plus makes 610 horsepower with 413 lb-ft. of torque. Gladly, my tester was the V10 plus. 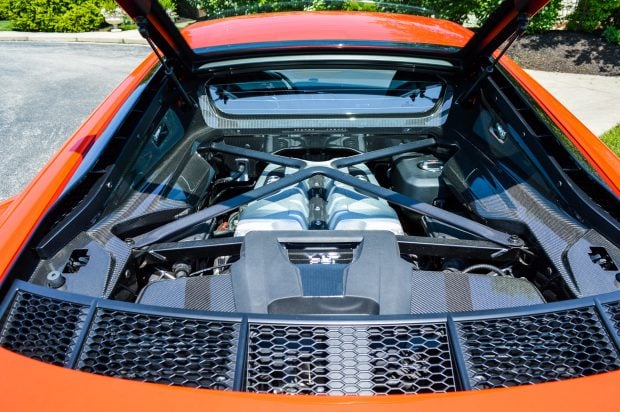 The amazing thing about the R8 though is how composed it feels. I’ve been full throttle in a Dodge Challenger Hellcat and the raw power felt out of control with that beast. With the R8, the power is controlled, and effortless. It’s almost disappointing. Almost. Okay not really. But still, what I expected the R8 to be was different than what it was.

Audi is known for all-wheel drive and delivers it in their latest supercar. The AWD system functions like a rear-wheel drive one but can throw up to 100 percent of the available torque to the front axles if needed. This is what really makes the R8 so special. The handling is composed and controlled thanks to dual-wishbone suspension both front and rear. It held tight to the road, and cornered perfectly without drifting. Despite the low profile, it was incredibly smooth on the road. You don’t feel every bump, pothole and imperfection on the road. It really is like being inside a powerful jet plane. You know you’re going fast, but it’s so smooth you forget – at least until you get to the higher gears.

The 7-speed double clutch Tiptronic transmission performs well, although the downshifts can act peculiarly at times, especially in the lower gears. However, revving up in the highest gears, the R8 whirrs and purrs. You can hear the R8 coming, which is good, because it was difficult to see it in such of blur of speed. 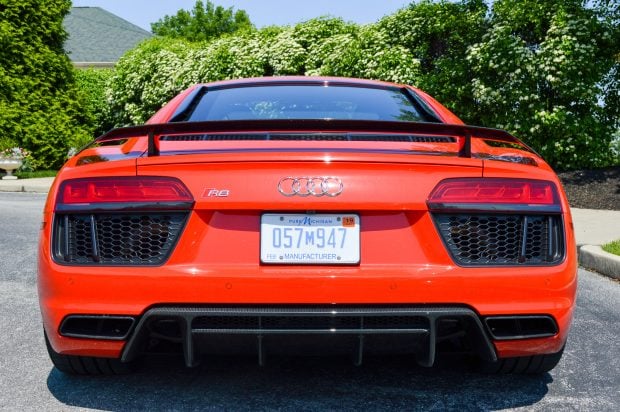 Inside, the two-seater shows its aggressive nature with racing-style seats. However, unlike other racing-style seats, these are wide enough and comfortable enough and offer an ideal seating position with good sight lines. The diamond-stitched leather seats are plush and supportive, and the soft-touch, stitched dashboard reflects the same level of craftsmanship. There are illuminated door sills and carbon fiber accents throughout the interior. Even the ceiling is lined with Alcantara, showing it’s not just the engine that brings value to this car. 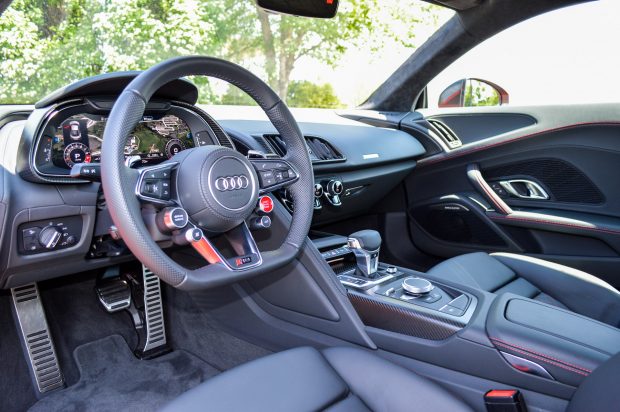 The cabin is reasonably quiet considering all the power of the engine. With the engine behind the driver, some of the growl of all those horses is diffused out the back, rather than piped through the front. Outside noise is minimized due to the soft materials used throughout the R8.

Sitting in the R8 feels like a cockpit. There’s a lot of technology and buttons at your fingertips. Driver and passenger are separated by a minimal center console that controls most of the technology. The cockpit analogy is a good one because new for this model year is what Audi calls their virtual cockpit which renders information on the instrument panel (just above the steering wheel), behind the normal tachometer, speedometer and odometer. Things like navigation and audio information are right in the driver’s line of sight, and the interface just looks super cool. 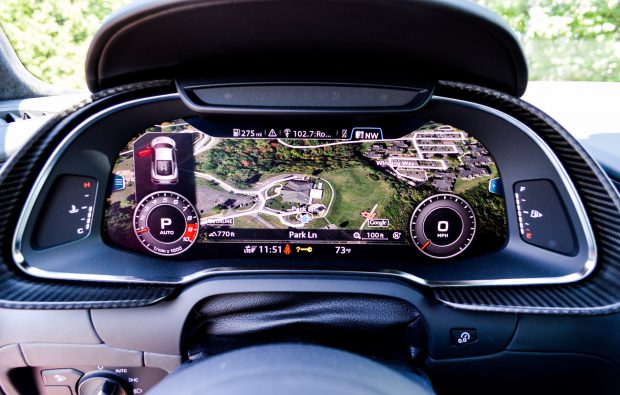 There’s a Bang and Olufsen Sound System with 13 speakers and 550 watts of power, and Audi’s MMI infotainment is improved and less complicated than ever before. Kudos to Audi for not abandoning all of the tech-heavy features in the R8, but in improving how they’re managed. Past Audis were sometimes over-engineered in this regard, but the new R8 shows those features can add to the wow factor, not detract. 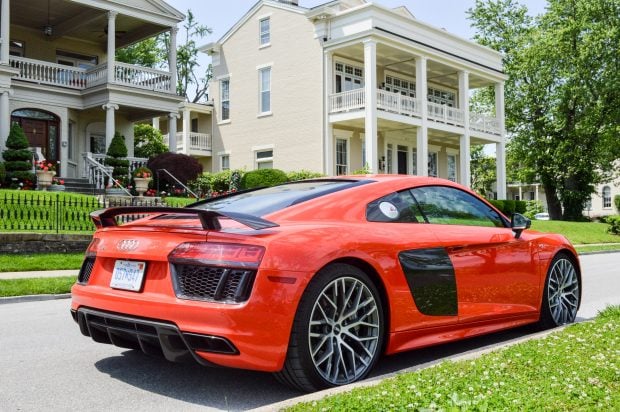 So with that all in mind, I’m going to start playing the lottery in hopes of hitting it big. Or at least winning enough to buy myself a 2017 Audi R8. Because one week in this amazing car was simply not enough.